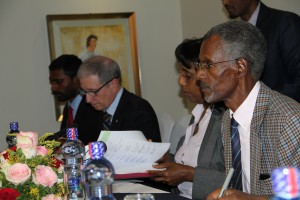 The International Astronomical Union (IAU) has signed an agreement with Ethiopian partners to host a regional office in Addis Ababa.

The facility that will result from the agreement signed on Friday, January 10th, represents the first regional astronomy node to be established on the African continent, reports indicate.

Furthermore, it is reportedly part of IAU’s strategic plan, which aims to influence society through astronomical knowledge.

The initiative is in collaboration with the Ministry of Education, Ministry of Science and Technology, Addis Ababa University, and the Ethiopian Space Science Society.

Founded in 1919, the IAU is the globally recognized body for coordinating space activities. Also called the Regional Office of Astronomical Development (ROAD), the office aims to conduct research and facilitate training, reports indicate.

Several regional nodes have been established in China and Thailand for East and South East Asian regions respectively.

The IAU’s establishment is intended to support the goal of promoting and safeguarding astronomy through global cooperation.

Ethiopia is also host to the African Union, which in recent years have endorsed key astronomical projects such as the Square Kilometer Array. Observers therefore assert that it is rather significant that the same African nation will host an office committed to coordinating the developmental gains of astronomy in the region.

This year, Ethiopia will also commission the construction of two telescopes outside Addis Ababa, reports indicate. The telescopes will serve every astronomer in the region, authorities say.

The IAU will support the Regional Office of Astrological Development (ROAD) by soliciting finances, helping it gain recognition and offering progress updates, according to reports.

Kevin Govender, the director of the Office of Astronomy for Development (OAD) asserts that the agreement is a momentous milestone for the growth and development of East Africa’s astronomy. Govender further adds that the office will aid in establishing centers around the globe committed to developing astronomy in diverse regions.

The director of OAD also remarked that the goal of the node is to use astronomy for stimulating development and education. Govender expressed his excitement over the collaboration with his Ethiopian colleagues.

During the signing of the agreement, Govender was especially excited about the visionary leadership demonstrated within Ethiopia in terms of technology and science, in addition to the exemplary projects the nation has embarked on, reports indicate.

Piero Benvenuti, the assistant general secretary to the IAU also added that IAU has a strong commitment to astronomy and the numerous developmental and educational benefits brought by the field.

The establishment of Ethiopia’s regional node has reportedly obtained strong support from the EAAS, which comprises representatives from numerous countries including Burundi, Kenya, Ethiopia, and Uganda.

Moreover, they assert that the office reinforces Ethiopia’s leading role in developing astronomy in the East African region. As Ethiopia prepares to embark on this task, Ethiopian authorities are optimistic that the IAU will develop successful collaborations with Ethiopian universities and research institutions.