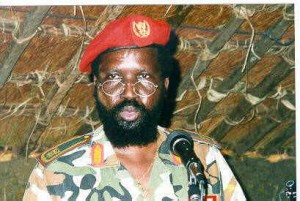 Several South Sudanese officials have confirmed that a group of soldiers unsuccessfully attempted to wrestle power from the legal government through a coup d’etat on Sunday.

According to official sources, the renegade soldiers attacked two important barracks (one of which houses the Presidential guard) close to the nation’s capital Juba at about midnight yesterday. Fighting between the rebel soldiers and those loyal to the government continued until early Monday morning when the nation’s security forces announced they had the situation under control.

President Salva Kiir adressed the nation today saying “I would like to inform you, at the outset, that your government is in full control of the security situation in Juba.”

The President announced a 6am to 6pm curfew as security forces attempt to consolidate their victory against the rebel soldiers. A travel ban has also been enforced on the young nation and flights grounded indefinitely. Officers from the South Sudanese military are reported to have been stationed on crucial streets across the nation’s capital.

“I will not allow or tolerate such incidents once again in our new nation. I strongly condemn these criminal actions in the strongest terms possible.” President Kiir remarked.

Several witnesses confirm that heavy gun fire and explosions could be heard late on Sunday night. By morning, the clash, which is reported to have been triggered by a gun-shot outside an official Sudan People’s Liberation Movement (SPLM) conference, had spread to other regions in Juba. Hundreds of South Sudanese citizens are reported to have sought shelter at the UN center, while thousands more shut themselves indoors.

Hilde Johnson, UN special representative to South Sudan earlier revealed that about 800 civilians had sought shelter in the facility. Adding that at least one person was treated for gun-shot wounds.

Several South Sudanese politicians are reported to have been arrested following the outbreak of violence. Currently, it is unclear how many officials are in custody and if the ex-vice president is among them.

Numerous South Sudanese officials accuse the ex-vice president, Riek Machar, of orchestrating the failed coup d’etat.  Marchar, who was fired in July along with the entire cabinet by President Kiir, is reported to have been brooding over his sudden dismissal from office.

According to critics, President Kiir may have fired Machar over suspicions his former fellow South Sudan Liberation Army (SPLA) fighter may be hatching a plot to oust him as leader of the party and president. But sources close to President Kiir insist the leader’s surprising move to drop his deputy and entire cabinet is due to the much publicized failure of the administration to deliver on promises made to the people in 2011.

Last month, President Kiir announced the dissolution of two important SPLM administrative structures; the political bureau and the national liberation council. According to the President, the decision was due to the party’s failure to hold its elective assembly earlier in the year, which in turn has prevented the election of new officials to replace the current ones who have since exceeded their tenure.

Following this decision, several leading figures in the SPLM, including Reik Machar and Rebecca Garang, held a press conference during which the former vice president noted that the “dictatorial tendencies” of President Kiir is “likely to cause a disruption in the party and in the country.”

The group, who experts say may ultimately develop into an opposition party led by Machar, had called on President Kiir to reinstate and convene the party’s political bureau to “set a vision” for the national liberation council.

Several reporters at the press conference on 6th December revealed that security officials had warned them against reporting on the conference. At least two local newspapers that covered the event allegedly had copies of their publications confiscated and their officials arrested the next day.

The UN, as well as the United States and Britain have, meanwhile, called for calm in South Sudan. The UN special representative to South Sudan revealed that “I have been in touch regularly with the key leaders, including at the highest levels to call for calm.”

South Sudan gained independence from Sudan in a referendum in 2011 in which a majority of the local ethnic groups voted overwhelmingly to secede from Sudan after decades of war. The young nation has struggled to function administratively amidst a raucous internal dispute in the ruling SPLM, accusations of widespread corruption, ethnic divisions and, most notably, disputes with Sudan–which saw oil shut for up to 15 months between 2012/13, severely disputing South Sudan’s revenue stream.

With the country’s first national elections scheduled for 2015, many commentators question if the SPLM will be able to resolve its internal strife ahead of time. On his part, President Kiir has repeatedly voiced his intention to go ahead with the elections despite the lack of cohesion in his party.