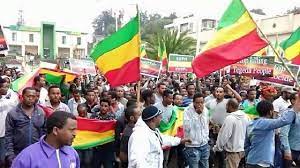 The tens of thousands of demonstrators said the latest results of the Ethiopian Secondary School Leaving Examination (ESSLC) are one of the showcases of ongoing conspiracy politics against the people in the Amhara region.

The protests were held despite bans by the regional government which was accused of collaborating with the Oromia Prosperity Party dominated federal government and making no significant efforts to nullify the result.

The demonstrators also called for justice for those ethnic Amhara people who have cold-bloodedly been killed by the military wing of the Oromo Liberation Front (OLF) in the country’s Oromia region.

The 0ver 16 months conflict between the federal government and the Tigray People’s Liberation Front (TPLF) worst affected the Amhara region leaving the students in the region unprepared for the examination.

A week ago, twenty thousand students, largely from ethnic Amharas, complained over the downgrading of their exam results for the secondary school leaving examination.