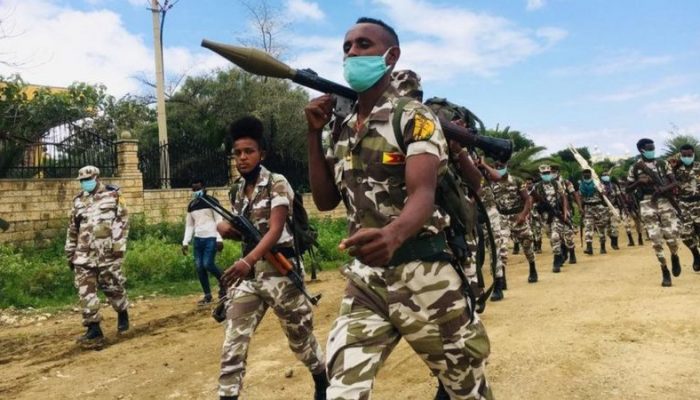 The Tigray People’s Liberation Front (TPLF) on Monday launched a wide-ranging offensive against the neighboring Eritrea after months of military preparation.

TPLF is said to have mobilized about half a million troops to the new front in an attempt to regain the disputed Bademe and Shiraro districts from Eritrea.

Witnesses told Zegabi.com that the fighting has continued amid bombardments of heavy weapons from both sides.

Back in 2000, the Ethio-Eritrean Border Commission demarcated the disputed Bademe and Shiraro districts as parts of Eritrea.

TPLF, as the dominant party of Ethiopia, did not accept the commission’s decision which was regarded as “final and binding.”

The new fighting with Eritrea comes as thousands of people have been displaced from Tigray to the Amhara region, fleeing hunger in their war-hit region.

The displaced people are told to stay in their designated camps to avoid entrance of TPLF insurgents in the region and for other security reasons.

Meanwhile, fighting between the Amhara Popular Force otherwise known as ‘Fano’ and the regional special force has continued for the second day in Mota town with reports of seven fatalities.

The fighting began after the regional force killed Mezgebu Walelegn, one of the leaders of the popular force. The Fano fighter killed six members of the government force in a counter offensive.

Fano Mezegebu was shot and wounded after he refused to stop the graduation of new Fano fighters. He, however, died hours after the shooting in a hospital.

The Fano forces are currently fighting the regional security forces from the nearby forests.