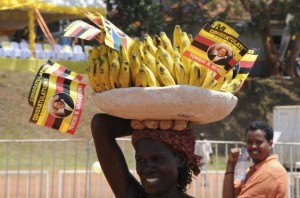 The Ugandan public is in the middle of a raucous debate over the introduction of genetically modified (GM) crops to guarantee food security.

The public is reportedly being bombarded with messages from companies and activists highlighting the pros and cons of GMO. The Ugandan parliament currently has a bill before it – the Bio-Technology and Bio-Safety Bill 2012 — which if passed would legalize the sale of GM seeds and products.

Government officials say the decision over whether to introduce GMO into Uganda hinges largely on the results of commissioned trials of GM seeds in fighting the spread of destructive diseases that causes the nation to lose millions yearly.

Uganda depends on agriculture for a significant portion of its gross domestic product (GDP), therefore the possibility of increasing production through GM seeds is attractive to both local farmers and government agencies.

But anti-GMO activists have undertaken a loud and persistent campaign in Uganda, warning local farmers against the dangers of supporting the introduction of GM seeds. An incident in August when the Ugandan Ministry of Agriculture placed a ban on powdered milk from New Zealand after reports confirmed that it contained clostridium botulinum–which causes botulism—has been used to illustrate the dangers of GM seeds, should the experiment fail.

Uganda is the world’s 2nd largest producer of banana, which features prominently in the country’s diet. But widespread infections of banana with bacterial wilt and black sigatoka is threatening to cut down the amount of banana produced in the east African nation yearly. Many farmers are reported to be already opting for other disease-resistant crops.

In one of the GMO trials currently ongoing in the country, the National BioResource Project, scientists say they have been able to create a banana gene resistant to bacterial wilt from pepper genes. But officials have expressed caution over the success of the project.

Trials for the introduction of GMO into Uganda has been ongoing since 2003, and many proponents of the move, such as Mosanto, are reported to have backpedaled a bit in anticipation of the passing of the bill soon.

Government officials say several quality assurance tests need to be carried out to guarantee the public of the viability of the idea.

Across Uganda, a majority of the farmers are torn between supporting the introduction of GM seeds or joining the rally against it. Thanks to the tireless efforts of anti-GMO activists, several farmers are reported to now know the pros and cons of GMO. While the lure of increased yield and profit is alluring, the threat of a disease outbreak or the monopolization of the supply of seeds expensively to farmers is preventing many of them from throwing their support behind the bill.

But proponents of GMO downplay the possibility of these event occurring, noting that numerous countries including Burkina Faso and South Africa have been able to successfully introduce GM seeds to the local population, with many positive benefits.

According to some critics, the decision to introduce GM seeds to Uganda is not about food security– they argue that food security goes beyond securing production, but also ensuring the transportation, distribution and storage of food items are also secured.

Speaking on the state of things, an unidentified researcher in Uganda noted that “ultimately, farmers, whom these seeds will effectively change their lives have very little say on whether or not the seeds are introduced. Ugandans know fighting hunger in this country is not about increasing food supply and that this move is only to bring Uganda in line with a much larger global strategy.”

Photo of a Ugandan woman selling bananas, the national flag with the portrait of President Musuveni hangs from her tray. [Donald Kabuubi/AP]