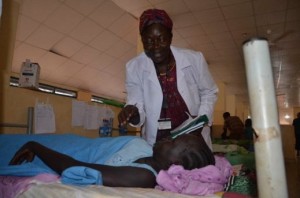 The campaign which ended last week was designed to raise awareness on obstetric fistula, a condition where a hole develops in the birth canal as a result of obstructed labor.

Over 86 women showed up at the Juba Teaching Hospital for the surgery.

One of the women, Lilian Pita, who underwent the surgery for the fourth time termed the operation as success and urged more women to take advantage of the opportunity next time.

“I am now OK. I am happy because there is no urine in my bedding,” she told VOA News after the operation.

She went ahead to describe the stigma she has had to endure due to her condition saying “Before… I felt so sad and everyone would insult me. When I go home, the people who were insulting me will now be embarrassed.”

Some women who were not as lucky were turned away due to the massive turnout and asked to come back in February. One such woman who had travelled from Yida refugee camp with two others said “I am very angry. We will go back but how will I live? I don’t want to go back alone; if possible, I should be left here until February.”

One of the doctors involved in the campaign, Merghani Abdallah, explained that most of those who were turned away required “special operations.”

It is estimated that over 60,000 women in South Sudan suffer from Obstetric ﬁstula, a leading cause of maternal mortality. The condition affects, almost exclusively, women living in developing countries like South Sudan where health care providers and health facilities are inadequate. Women who suffer from this condition also face social isolation and varying degrees of abandonment.