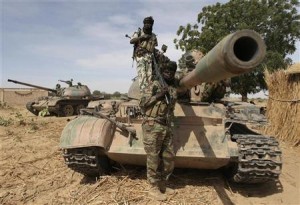 A joint contingent of the Chadian and Sudanese military began an operation against rebels in Darfur this week.

Earlier there were reports that Sudan’s Defense Minister Abdel Raheem Mohammed Hussein had informed the Sudanese parliament of an imminent attack on rebels in Darfur. Following this the government of Chad deployed troops to support the mission.

War broke out in Sudan in 2003 when rebel groups took to arms after accusing the government of ignoring the non-Arab population. Several armed tribal bands have since joined the battle. Although the Chadian and Sudanese governments were at loggerheads a few years ago, their relations have dramatically improved—resulting in a joint campaign against rebels in Darfur since 2010.

According to a report by Reuters, on Thursday chad helicopters struck at a rebel camp in Tissi, close to the Sudan-Chad border.

The base under attack is reported to belong to the Union of Forces for Resistance (UFR). Earlier in the year the rebel group threatened the government that they would reach for their arms after an extended wait for peace talks to be initiated.

However, with both the Sudanese and Chadian military expected to send reinforcements to the mission against the tribal fighters soon, the nations seem determined to see an end to the protracted upheavals in both territories.