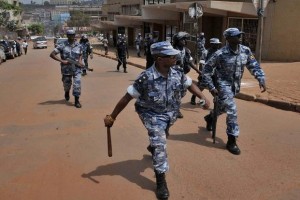 Police in the Ugandan capital Kampala have increased their presence in opposition strongholds in Katonga and Nasareko, after a report released yesterday found the city’s Mayor and major opposition figure guilty.

Erias Lukwago, who has been the Mayor of Kampala since 2011, was found guilty of abuse of office, incompetence and misconduct by a three-member tribunal created to investigate his actions.

A meeting of the city’s councilors is scheduled to take place in the coming weeks, during which a vote will be made on Lukwago’s fate. Many fear an impeachment of the Mayor would lead to widespread riots and violence on the city’s streets.

Prior to the release of the tribunal’s report yesterday, the Kampala Police Force had deployed officers to crucial locations around the residence of leading opposition figures, such as Forum for Democratic Change (FDC) President Kizza Besigye.

According to the city’s Police spokesman, Ibin Ssenkumbi, the Police had uncovered a plot by the opposition to organize violent riots if the results of the probe did not go the Mayor’s way. However, the opposition have denied these claims.

According to Kawampe division Mayor Mubarak Munyagwa, who was implicated by the Police as the commander of the planned insurrection, the opposition is rallying people under a scheme entitled ‘Force Erias Back Again’ (FEBA) to ensure the Mayor is back in office regardless of the result of the tribunal’s investigation.

Following the release of the report, which found him guilty, Lord Mayor Lukwago has voiced his disagreement with the findings. According to him, the accusations by local leaders and the tribunal’s investigations are part of a grand plan being orchestrated by President Musuveni to get him out of office.

Several opposition figures have also accused the President of masterminding the supposed ‘witch-hunt’ against the Mayor. FDC’s President Besigye said the plan is to get Lukwago out of office to enable the President control the city through any Mayor who fully supports the President’s schemes.

Clashes between Ugandan security forces and the opposition has been rampant in the past few years, with the opposition leader Kizza Besigye spending time behind bars.

The government accuses Mayor Lukwago of conniving with the opposition to obstruct developmental schemes in the nation’s capital.  After the Mayor voiced his determination to challenge the findings of the tribunal yesterday, a government’s spokesman made a statement dismissing his calls while insisting on the legitimacy of the process. President Musuveni is reported to have suggested that the Mayor offers a public apology to be excused his crimes. But the Mayor has flatly refused to do this.

The streets of Kampala remains tense, and many fear a major confrontation is just around the corner.