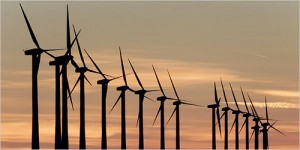 The largest wind farm in Africa was officially launched by the Ethiopian Prime Minister Hailemariam Desalegn over the weekend in Mek’ele – capital city of the Tigray region in the northern section of the country.

Dubbed ‘Ashegoda Wind Farm’, the 120MW capacity facility is reported to have cost about $290 million and took over three years to construct. Due to the size of the project, its construction was divided into three phases.

The Ashegoda project was constructed by French company, Vergnet Groupe, with funding from BNP Paribas and the French Development Agency as well as the Ethiopian government. Supervision was provided by Lahmeyer International, a German company.

According to reports from the Ethiopian Electrical Power Corporation (EEPCO), prior to the launch of the third phase of the Ashegoda project on Saturday, the country was already getting 90mKWh from the two completed phases of the farm. Experts at the EEPCO say the country expects to get about 400KWh from the farm yearly.

The 84-turbine Ashegoda Wind Farm is part of the Ethiopian government’s efforts to diversify and expand the nation’s power supply in order to accelerate social and economical development. Currently, a majority of the country’s power is derived from hydro electrical dams. However, due to erratic weather patterns, the nation’s power supply has come under threat. Authorities say enquiry into wind power was made after experts revealed that next to Egypt and Morocco, Ethiopia has the the best sites to harness wind energy on the continent.

At the launch of the wind farm, the Ethiopian PM highlighted on the importance of power to economic and social development, especially in light of the difficulties presented by climate change.

The completion of the dam, albeit about two years behind schedule, fits well into the government’s plan to build a climate resilient economy by 2015. Among other things, the Ethiopian government aims to be the leading producer and exporter of renewable energy in East Africa. The launch of the Ashegoda wind farm brings to a total of three the number of wind farms constructed within the past three years in Ethiopia (the others are Adama I and II), with a total capacity of 222MW. Although this is still far from the nation’s objective of boosting its power supply from 2,000MW to 10,000MW in the next three to five years, many see the completion of the project as a crucial step in the nation’s journey to correcting its power problems.

Besides wind energy, the Ethiopian government entered into a deal with US firm Reykjavik Geothermal to build Africa’s largest geothermal plant. The country has also made remarkable strides in the construction of Africa’s largest hydroelectric facility, the Grand Renaissance Dam.

Ethiopia is the second most populous nation in the continent, with the second most successful economy in East Africa. However, about fifty percent of the country’s population are reported to be without steady power supply. With the new developments the government is setting under way, the nation’s power problems are expected to be resolved soon.