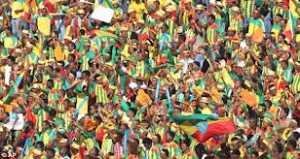 Juneidin Basha has been named the new President of the Ethiopian Football Association.

Mr Basha replaces Salihu Gebrewold, who had held the position for about 3 years.

He assumes this office after claiming over 50% of the result at the Ethiopian Football Association’s elective general assembly between the 7th to 9th of this month.

Only three other candidates – Dr. Tawfiq Abdulahi, Wondimu Gezahegn and the ex-President – were left in the race after Vice President, Teka Asfaw, pulled out earlier in the competition.

Basha comes to office at a crucial time in the history of Ethiopian football. The Wayla Antelopes can change the tides of history if they are able to out-manoeuvre the Super Eagles and make it to the Brazil 2014 World Cup.

Several Ethiopian players believe this team has the potential to wrestle a good result against Africa’s champions – especially since the match will be played in Addis Ababa.

According to the pundits, this is Ethiopia’s chance to get an advantage ahead of the return leg in Nigeria on 16th November, which is expected to be much more difficult for the Wayla Antelopes.

Earlier in the week, the Ethiopian FA announced the loss of one of its key strikers, Getaneh Kabede, to injury. Despite this, the Ethiopian coach says his team is capable of stopping the Eagles.

On the other side, Nigerian coach Stephen Keshi expressed his confidence in his team’s ability to get the job done in Addis Ababa. According to him, the team is mentally prepared for all forms of challenges the Ethiopian players and fans would throw at them.

As the reigning champions and one of the most celebrated teams on the continent, much is expected of the Nigerian team. But they have performed less than remarkable in the past few years. Many fans believe the new coach has the key to get the team back to their glory days.

The Super Eagles are scheduled to travel to Ethiopia on Saturday.