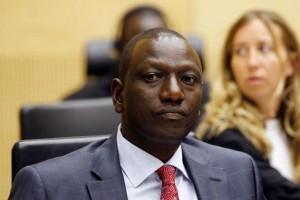 Defence lawyers are set to begin drilling witnesses today behind closed doors in the case involving Kenya’s Vice President, William Samuel Ruto, and Kenyan national broadcast director, Joshua Arap Sang. The defendants are being charged for perpetuating crimes against humanity in the violence which engulfed the country between 2007 and 2008 following disputed elections.

On Wednesday, the chief prosecutor Judge Chile Eboe-Osiyi issued a statement cautioning the media to avoid revealing the identity of witnesses. He described it as being “against the administration of justice…for anyone to do anything intentionally that would amount to corruptly influencing a witness, obstructing or interfering with the attendance or testimony of a witness, or retaliating against a witness for giving testimony in a case before the Court.”

The public has closely followed this case since it began on the 10th of this month in the Hague, Netherlands. And after Willis Raburu’s stunt a few days ago, there is no doubt the court will tighten its grip on any information relating to the trial. Although both defendants have entered not guilty pleas at the start of the trial, commentators expect the case will open up a lot of old injuries before a verdict is reached. A lot of questions continue to surround the trial, and the verdict of this case – whatever it may be – will be historical.