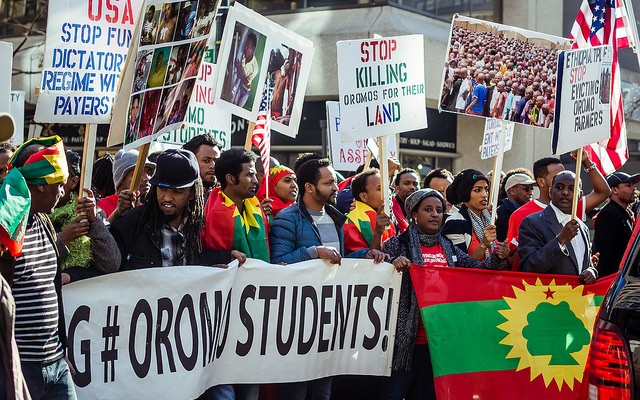 Ethiopia has once again accused Egypt and Eritrea of sponsoring armed opposition groups which Addis Ababa claims are responsible for the recent unrest in the country.

Tekleberhan added that the involvement of Asmara and Cairo by supporting foreign-based Ethiopian opposition groups led to the recent unrest in the Oromo and Amhara region, Sudan Tribune reported.

Ethiopia has previously accused “elements” in Egypt of supporting the Oromo Liberation Front (OLF), an opposition group which the government has banned.

Although Cario has categorically denied the accusations, Addis Ababa says this foreign interference led to the unrest which resulted in the death and incarceration of hundreds.

Human Rights Watch reported that the death toll is more than 400. However, Tekleberhan said Addis Ababa is still investigating to confirm the exact number of causalities.

In October, when Ethiopia first accused Egypt, President Abdel Fattah al-Sisi denied the accusations, saying his country “does not conspire against anyone,” Reuters reported.

” I want to assure the brother in Ethiopia that Egypt has never offered any support to the opposition and will not carry our any conspiratorial action against Ethiopia,” he said.

The Ethiopian government has since imposed a 6-month long state of emergency in response to the widespread demonstrations which started in the Oromia region last year over land rights.

This week, the Ethiopian government announced that it had reshuffled its ministers. According to Tekleberhan, the move was not inspired by the recent anti-government protests. However, the government gave two key positions to members of the Oromo ethnic group where the protests have been intense.

The relations between Ethiopia and Egypt have been tested since Addis Ababa began constructing its 6,000-megawatt Grand Renaissance Dam. Both countries, which share a right to the Nile River, have been in intense negotiations over the effects of building a dam on the historical water source.