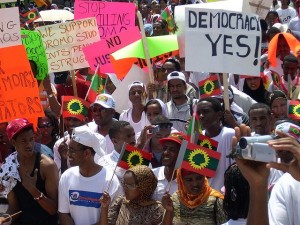 Police in Ethiopia have responded violently to students protesting a government plan to extend the capital city Addis Ababa into Oromia, the largest region in the country.

According to the Human Rights Watch, about three students have lost their lives in the protests, which began about two weeks ago. Hundreds, including university, high school and even primary students, were reportedly involved the violent protests.

While police in Oromia have confirmed the three casualties, members of the opposition say the number is higher. According to Bloomberg, about 10 students have been killed so far.

Bekele Nega, general secretary of the Oromo Federalist Congress, said there was a higher number of fatalities.

“The protest is not as usual, they are not backing away,” Nega stressed. “They are not willing to stop until the demands are met”.

The students, who are predominately from Oromia, are protesting a controversial government plan. The Master Plan or the Addis Ababa and the Surrounding Oromia Special Zone Integrated Development Plan was initially proposed in 2014.

About 9 students were killed and hundreds were arrested in May 2014 while protesting against the proposed plan. After the incident the government momentarily halted the plans, however, it continued in November, sparking new protests.

The Master Plan aims to expand the rapidly populated capital Addis Ababa into Oromia state. However, the students equate the plan to a land grab, which they claim would have devastating effects on the Oromo people.

Ethiopia’s Communications Minister Getachew Reda said the ‘Master Plan’ will not intrude on the administrative boundaries of the Oromia region. He added that the plan will bring about the development of transportation, utilities and other recreational centers.

Reda insists that the protesters have ulterior political motives for taking to the streets. He added that regardless of their reasons, the protests should be conducted in a peacefully.

He also admitted that the police may have been overwhelmed with the protesters on some occasions – and as a result lost their cool.

“We know the protests are based on false claims by some political elements, but whatever the source of protest they should be done in a peaceful manner,” he said.

“Generally security forces have been exercising significant restraint, but there were areas where they have been overwhelmed.”

Addis Ababa, which serves as Ethiopia’s regional and federal capital, is located in the state of Oromia. According to the Ethiopian constitution, Oromia is one of the nine ethnic politically autonomous regional states in the country. The state is home to about 100 million people – nearly half of the country’s population.