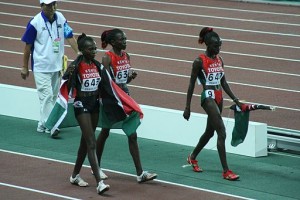 The International Association of Athletics Federations (IAAF) has been investigating cases of doping and allegations of bribes in Athletics Kenya since March.

The revelation of the probe came Tuesday following a report that the World Anti-Doping Agency (WADA) may suspend Kenya from all international competitions for four years – including from the 2016 Rio Olympics.

Colm O’Connell, who has coached several award winning Kenyan athletes including 800m Olympic champion David Rudisha, has expressed concerns following the announcement. “Our athletes are concerned, particularly the elite athletes, because they feel they are being tarnished with the same brush as those tested positive,” he said.

Over the years investigators have warned of widespread doping among Kenyan athletes. However, Athletics Kenya consistently dismissed the reports as foreign attempts to disrupt the sporting success of the East African country.

This week, Kenyan coach Paul Simbolei revealed that three marathon runners paid bribes to Athletics Kenya officials for reduced doping bans. He revealed that Kenyan officials often threaten to expose athletes if they not pay them a part of their winning price.

The names of the athletes and officials have not been released, however, reports indicate that the allegations are being investigated.

Three high-ranking members of Athletics Kenya have come under investigation after being accused of embezzling sponsorship monies. The reports claims that the officials – David Okeyo, vice president, Isaiah Kiplagat, chairman, and Joseph Kinyua, former treasurer, embezzled about $700,000 from Nike.

Kenya still remains under contract with Nike. However, it’s unclear how the details of the investigation would affect that relationship.

Athletics Kenya has a lot of work ahead in regards to doping and other allegations of corruption if it is to avoid a WADA ban. In recent years, 33 Kenyan runners have failed WADA doping tests.

In August, at the Beijing Olympics, where Kenya won several medals, at least two athletes from the East African country failed doping tests.