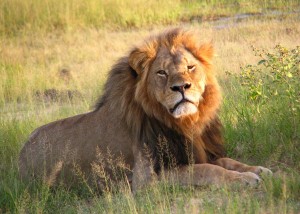 HARARE – Zimbabwean authorities announced on Monday that the American dentist, who killed Cecil the lion, one of the country’s most beloved animals, in June, would not faces charges.

Officials say Minnesota resident Walter Palmer had all his legal papers before entering Zimbabwe and killing the famed lion.

“We approached the police and then the Prosecutor General, and it turned out that Palmer came to Zimbabwe because all papers were in order,” Environment Minister Oppah Muchinguri-Kashiri said.

Muchinguri-Kashiri revealed that Palmer is free to visit the South African nation as a tourist. “He is free to come, not for hunting, but as a tourist,” he said.

Palmer, who has apologized for the incident, says he was unaware of Cecil’s importance to the nation.

Cecil the lion was one of the main tourist attractions at the Hwange National Park and had been part of an Oxford University research into lions. The university fitted Cecil with a GPS collar as part of the study.

“If I had known this lion had a name and was important to the country or a study obviously I wouldn’t have taken it,” Palmer said. “Nobody in our hunting party knew before or after the name of this lion.”

Palmer revealed that he shot Cecil the lion with a bow and arrow just outside the borders of the huge park. He added that Cecil was wounded and did not die immediately. The dentist said he tracked the lion and killed it with an arrow the next day.

While he has explained the circumstances leading to the death of Cecil the lion, Palmer has refused to say exactly how much he paid to hunt the big cat. The 55-year-old only said that all his legally required hunting papers were in order.

The Zimbabwean government had requested the extradition of Palmer from the U.S. after accusing him of killing the prized animal illegally.

Palmer, who recently returned to work, was mobbed by several protesters who chanted “murderer” outside his office at River Bluff Dental clinic in Minnesota.

The death of Cecil the lion triggered an international backlash from animal rights groups and people who argue that paying to kill animals for sport is wrong. Several animal rights groups have criticized poaching in Africa because the practice, which is often illegal, has rendered some animal almost extinct.

Some groups have called on the U.S. Fish and Wildlife Services to make the importation of lion, heads, tails and skins illegal.