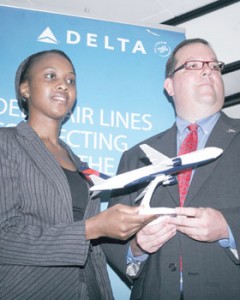 Standard Digital-(Nairobi)-The Government has maintained that it has almost concluded most of the negotiations with Delta Airlines for them to launch direct flights between Kenya and the United States. Foreign Affairs and International Trade CS Amina Mohamed, played down suggestions that Delta was not interested in the direct flights as yet.

A Delta Airlines’ official was quoted in a section of the Press last week saying that the airline has no “near-term” plans to begin direct flights between Kenya and the US. “Delta continues to evaluate market opportunities around the world, but we do not have any plans to start service to Kenya in the near-term,” London-based Delta spokeswoman Olivia Cullis was quoted as saying. But according to CS Mohammed, no formal communication has been made to the Kenyan authorities contradicting the earlier statements issued by Transport and Infrastructure CS Michael Kamau on direct flights.

“As far as we are concerned, the commercial discussions are over,” she said yesterday, adding that Delta is only awaiting the clearance of the Federal Aviation Administration (FAA) next month before the flights can kick off early next year. The FAA issued a warning in 2009 of a possible terror attack that saw Delta pull out of the direct flights plan at the last minute.

Hopes of direct flights between the two nations have, however, reawakened following a recent high-powered trip to the US by the Kenyan government and business community which has been billed as one of the most successful that Kenya has ever held with the world’s superpower.

But even if Delta does not take the risk to initiate direct flights, Kenya Airways is said to be highly interested in the venture. “They say their aircraft are ready, security has improved… all they said is they are waiting for the FAA approvals in September and would be willing to go from next year,” said Kenya Private Sector Alliance chief executive officer Carol Kariuki.

She said the Kenyan business community would prefer that KQ begins the direct flights before any other airline. Kenya pegs the push for direct flights between the two countries on the fact that it hosts the biggest US Embassy in Africa as well as key United Nations bodies such as Unep and UNHabitat. Trade between the two nations is also expected to rise following the recent US-Africa summit.