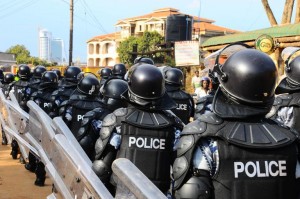 Ugandan police have drastically increased their surveillance in the country after reports emerged last week of impending terrorist attacks.

Police spokesman, Fred Enanga, has announced that all public places without adequate security provisions will be shut down.

He has also called on the public to be vigilant and collaborate with the police to curb any insidious plot.

The police have also increased their surveillance at the country’s borders. Reports indicate that individuals and vehicles entering the country are set to be subjected to a search and provided with security escort.

Last week, the United States revealed that its embassy in Uganda has received information of a plot to attack “places of worship in Kampala, particularly churches…in May or June.”

Mr. Enanga also told the press that “For the last couple of months, our police counter-terrorism unit and other sister security agencies have been receiving reports of terrorist groups planning to carry out attacks in the capital, Kampala and other parts” of the country.

Although the terrorists behind these threats are yet to be identified, many accusing fingers are pointing at al Shabab.

The Somali-based terrorists have declared war on all countries contributing forces to the African Union Mission in Somalia (AMISOM) in a bid to force their withdrawal.

Terrorist attacks have been rampant in neighbouring Kenya since the Westgate mall siege that led to the deaths of nearly 70 people in September last year.

Today, the Somali President Hassan Sheikh Mohamud has arrived in Kampala for talks with President Yoweri Musuveni. Although the agenda for their meeting has not been made public, there are many speculations that security will be given high priority.