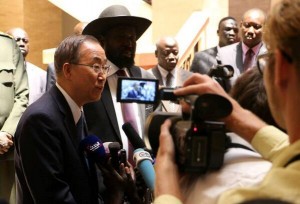 The former Vice President of South Sudan, Riek Machar, has agreed to meet with President Salva Kiir in Addis Ababa on Friday for discussions aimed at ending the ongoing insurgency that has led to the deaths of more than a thousand people and the displacement of and over a million others.

The Secretary General of the United Nations, Ban Ki Moon, who arrived in the war-torn country on Tuesday, confirmed the news to the press and welcomed the development.

He noted that “Even though they may have some different political views, there is nothing which they cannot overcome.”

Although no agenda has been formally set for the meeting, pundits speculate that a new ceasefire agreement will be given high priority.

The UN has warned of a humanitarian disaster if the fighting prevents farmers from planting ahead of the peak of the rainy season.

Reports indicate that the two opposing faction have agreed to consider laying down their arms for one month to allow civilians in the heart of the conflict to relocate. The ‘month of tranquility’ is also expected to permit humanitarian agencies reach civilians in dangerous areas and enable farmers meet the planting season.

The UN chief also met with key South Sudanese politicians and community leaders, as well as civilians in UN bases and others displaced people in the country. He affirmed that “The United Nations will continue to help them to return to their homes as soon as possible.”

Mr. Moon warned the two factions to respect international law and urged community leaders to facilitate peaceful co-existence. He also reiterated that the UN will investigate and prosecute all human rights violations in the six-month long conflict.

About 80,000 civilians are reported to be sheltered in UN compounds across South Sudan. However, reports indicate that most UN compounds in the country are in deplorable condition besides being prone to attacks. UN officials have, meanwhile, disclosed that the agency is yet to reach its funding target ($370) for its humanitarian mission in the world’s youngest country.

In the aftermath of the clashes over the weekend in Upper Nile and Unity State, the United Nations High Commissioner for Refugees (UNHCR), has revealed that the number of civilians crossing into neighbouring Ethiopia has increased dramatically.

According to UNHCR spokesman, Adrian Edwards, about 11,000 civilians have crossed a river separating Ethiopia and Kenya in the past 72 hours. He noted that most of the civilians (mainly women and children) are Nuer and are allegedly fleeing from Nasser, Upper Nile State – which has been reclaimed by government forces.

“The refugees tell us that more people are on their way, with many amassed on the South Sudanese side of the border waiting to cross the river on one of the few small ferry boats,” he said.

Reports indicate that the civilians, who shuttle across the Bawo river, are met by UNHCR representatives at the shore and are provided medical and nutritional care. The group are reportedly then registered and transferred to the Kule refugee camp.