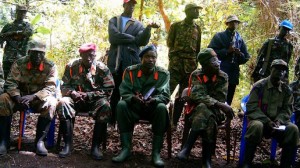 The Ugandan military have apprehended a top lieutenant of the Lord Resistance Army (LRA), Charles Okello, during a battle between the rebels and government forces on Monday, April 21.

A statement by Army Spokesman, Lt Col Paddy Ankunda, notes that “The battle took place 20km West of Bakuma which is about 500km West of Obo, UPDF’s tactical base.”

He also disclosed that the Uganda People’s Defense Force (UPDF) successfully rescued about 10 abductees from the rebels and recovered some equipments used by the group, according to local sources.

A recent report by The Resolve and Invisible Children claims that the LRA has lost about 18 of its most senior commanders through defections and clashes with government forces.

Reports indicate that these mass defections have been on the rise since the African Union’s Regional Task Force and the United States Special Forces got involved in the conflict a few years ago.

According to Invisible Children, in 2013 a record number of combatants defected from the radical Christian rebel group – reportedly the largest desertion the group has suffered since 2008.

A top LRA commander who recently defected, Lt. Col Obur Nyeko, has explained that the strength of group – who are behind one of the longest running insurrections in Africa – primarily lays in the loyal relationship between Joseph Kony and his top commanders.

He further reasoned that Kony will be easily defeated if the leadership of the group is infiltrated and his top commanders lay down their arms.

Reports indicate that the LRA is increasingly adopting guerilla warfare strategies, making it difficult for open combat that may lead to the apprehension of Joseph Kony and his soldiers.

Kony and several of the LRA’s top commanders are wanted by the International Criminal Court for allegedly war crimes, including the use of child soldiers and sex slaves.

Meanwhile, a commander of the African Union’s Regional Task Force, Brigadier Sam Kavuma, has reiterated that the campaign will not stop “until Kony is captured and all children [in the custody of the rebels are] rescued.

Lt Col Ankunda, who recently revealed that Ugandan authorities will collaborate with the ICC to investigate reports of war crimes by the LRA, has also noted that efforts are underway to encourage defections in the rebel ranks.

Photo/TVC News: Joseph Kony and some other top LRA commanders.