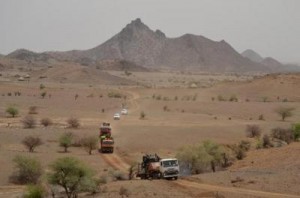 Ortac Resources has confirmed the presence of gold deposits in Ber Gebey after a silica-barito rock sample recovered from the area tested for gold values of up to 23.95 grams per tonne on its surface.

Reports indicate that other rock samples showed the presence of up to 7.55 grams and 4.46 grams of gold per tonne, as well as 31.7 grams and 20.9 grams of silver per tonne.

In January this year, Ortac entered into an agreement with Andiamo Exploration to acquire 26.7% of the British company, which holds a 252 square kilometer exploration license in Haykota, Gash-Barka region, Eritrea.

According to an official report by Ortac, following this agreement ” it was decided to re-evaluate the area between Yacob Dewar and Ber Gebey. A programme of concurrent mapping, rock chip sampling and soil sampling on 100m centres was undertaken to the south of the Ber Gebey gossan and to the north east of Yacob Dewar.”

The report further states that it was during this exercise that geologists discovered silica-barite deposits on rocks, which eventually led to the testing of some samples.

The Chief Executive Officer of Ortac, Vassilios Carellas, who described the discovery as encouraging, noted that “The identification of the (silica-barite rock) in outcrop to the south of Ber Gebey goes a long way to confirming our theory that the mineralised structure at Yacob Dewar extends 4 kilometres north east, at least as far as Ber Gebey.”

He went on to note that the results of the tests showing heavy mineralisation on the surface “is an indication that a significantly mineralised body is present at depth.”

Reports indicate that Ortac currently owns about 18% of Andiamo after paying in the second installment of their USD$1.5 million agreement last month.