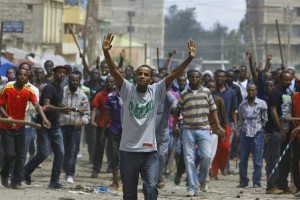 Kenyan security agents have recovered grenades and a box of chemicals believed to be used in the making of improvised explosive devices during a raid on one of Nairobi’s most notorious areas, known as Eastleigh or ‘little Mogadishu’.

According to a report by the Star, over 1,000 people are estimated to have been arrested since the joint-exercise aimed at eliminating terrorists from the suburb began last week.

Reports indicate that the bomb-making chemicals were recovered from a rented house on 7th street, near the Samad Islamic Institute. Officials have further disclosed that the owner of the apartment, identified as Aden Ibrahim, escaped the building before the search was conducted.

However, Nairobi Police Commander, Benson Kibue, has told the press that a manhunt has been launched for the suspect. He further called on ” members of the public to cooperate with and assist the police to ensure our security.”

Meanwhile, renowned Muslim preacher Sheikh Hassan Mahati Omar and his wife Fardosa Mohammed Abdi, have reportedly both been charged with being members of al Shabab after two grenades were found in their possession, according to a report by Sabahi.

Officials have intimated that the grenades are part of a larger stockpile, which they hope the suspects will lead them to. However, reports indicate that the suspects, who have been both denied bail, have pleaded innocent.

Many residents of the predominantly Somali-populated area have expressed concerns that the raid on terrorists may transform into reprisal attacks on Somalis in Kenya in the wake of a spate of attacks linked to Somali suspects.

The deputy head of the Human Rights Committee of the Somali Parliament, Muse Sheikh Omar, is quoted by Horseed Media saying the Kenyan government must take the necessary steps “to protect the rights of the Somali refugees and not to discriminate them. Not all aliens are terrorists.”

The Kenyan government recently put out a directive ordering all refugees in urban areas of the country to report to the Kakuma and Dabaab refugee camps allegedly after reports emerged that terrorists are filtering into the country from Somalia with fake identification documents.

The Deputy Police Commander of Nairobi, Moses Ombati, has disclosed that many of the suspects rounded up during the latest exercise have no legal identification documents.

Due to the protracted war in Somalia, there are thousands of people, aptly described as Kenyan-Somalis, who although they have lived in the neighbouring country for many years have not secured the necessary identification papers. Several pundits have raised questions over the government’s strategy of dealing with this group.

Meanwhile, the American government has issued a travel warning to all her citizens currently in Kenya and those planning to go to Kenya to consider their personal safety in light of several terrorist activities over the past few weeks.