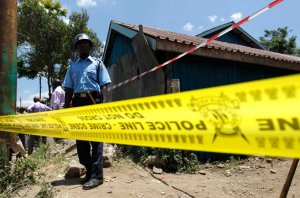 Mombasa Police Chief, Robert Kitur, on Friday, revealed that officers have gunned down 2 men about one kilometer from a church that was attacked on Sunday, March 23rd.

The deceased suspects are believed to have been part of the attackers of the Joy Repentance and Holiness Church, according to Kitur.

Standard Digital quotes the police chief explaining that “We received reports that the suspects who matched the description of individuals behind the attack had been spotted on a motorbike and when our officers track[ed] them down they started firing when they were cornered.”

Reports indicate that one suspect escaped with injuries. The police have reportedly mounted an operation to track him down.

Kenyan security agencies have increased patrol of volatile areas in Mombasa over the past week. Locals say many road blocks have been set up across the coastal city. The police have reportedly also mounted an operation to retrieve all illegal weapons and stump the growth of gangs in the coast, which is at the heart of Kenya’s struggling tourism industry.

Reports indicate that 200 suspects were arrested for complicity in Sunday’s attack and about 95 of them have been officially charged.

Kitur told the press that a loaded gun matching bullets recovered from the church attack was found on the suspects and has been forwarded for forensic examination.

The attack on the church bared religious division in the city and officials are quickly working to neutralise any lasting effects.

Reports indicate that Mombasa security officials held separate meetings with Christian and Muslim religious leaders this past week. Leaders of both religious groups are also set to hold a meeting to address the growing tension in the city.

Religious leaders have accused Kenyan security agencies of overlooking security threats to places of worship. Some commentators have even raised questions about the effectiveness of the police, after reports emerged that they responded late to calls for help during Sunday’s attack.

Meanwhile, reports indicate that Kenyan officials are considering dispatching security agents to churches in Mombasa over concerns that al Shabab and other terrorists may be targeting them.