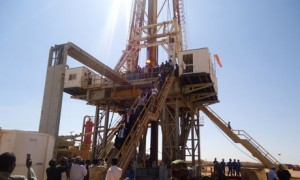 The Somali government has commissioned a study of the nation’s offshore oil and gas reserves by British-owned Soma Oil and Gas.

According to a report by Bloomberg, depending on the result of the survey, which commenced mid-February, the Somali government may start issuing exploration licenses to petroleum companies by next year.

Due to the outbreak of civil war in Somalia in 1991, the country’s oil and gas industry has virtually grounded to a halt.

However, as the federal government regains control of the war-torn country, officials have said plans are underway to re-lay the nation’s economic foundations.

A top adviser to the government, Adullahi Haider, has disclosed that the country will honor its contracts with several petroleum companies – including Royal Dutch Shell, Chevron and BP – prior to the outbreak of war more than two decades ago. This arrangement could reportedly see these companies return to the nation’s shores by the Indian Ocean as soon as next year.

Reports indicate that the government is currently in talks with these companies over the prospects of resuming their operations.

Haider revealed that once the seismic study is completed, application for licenses will be open.

“Once we settle all the issues between the federal-central government and regional authorities, the petroleum law, the establishment of the regulatory framework, then optimistically there will be full-scale exploration,” he said.

Soma Oil and Gas has disclosed that the 2D seismic study, being undertaken by Seabird Exploration, will cover about 20,000 km and is expected to be completed in 90-100 days.

East Africa is quickly emerging as a new hub for oil and gas exploration in the continent following discoveries of large petroleum reserves in several countries in the region, including Kenya, Tanzania and Uganda.

Experts say Somalia could potentially hold up to 100 billion barrels of oil in its onshore and offshore reserves.

Robert Sheppard, the Chief Executive Officer of Soma Oil and Gas is quoted on the company’s website saying that “Somalia remains a significantly under-explored region despite large recent discoveries elsewhere in East Africa and we are working to assist the Government in accelerating the development of its oil and gas potential.”

The company has revealed that it is “in the process of collating and reprocessing historic seismic data using modern techniques, and will prepare an evaluation of Somalia’s petroleum potential.”

Recently, the Somali government has been involved in a dispute with Kenya over the appropriation of 4 petroleum exploration blocks offshore southern Somalia to a French and Italian company.

Somali authorities say the move violates the 1982 United Nations Common Law on the Sea, and has threatened to call for international arbitration.

The dispute is reportedly an extension of the Somalia-Kenya maritime border disagreement, and Somali authorities have expressed interest in dialogue to resolve the conflict.

Photo by Reuters: Officials take visitors on tour of an exploration well in Puntland.