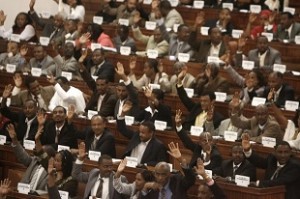 Legislators in Ethiopia are expected to pass into law a bill that would make same-sex acts a non-pardonable offense.

Last week, Ethiopia’s Council of Ministers endorsed the measure that would amend the country’s Pardon and Amnesty Law, which lists homosexuality among other offenses as unpardonable.

Reports indicate that a vote will be called for the bill in parliament next week before the amendments are finally made.

The bill is reportedly aimed at curbing the president’s power to pardon prisoners who commit certain crimes, including homosexual acts. Other offenses included in the list are corruption, human-trafficking, smuggling, rape and terrorism.

Ethiopian officials have called for quick voting on the bill.

Meanwhile, some commentators have criticized the move.

In Ethiopia, same-sex acts are already illegal and punishable by up to 15 years in prison.

Under Ethiopia’s anti-advocacy law, which critics say stifles activism, charities and nongovernmental organizations that receive more than 10 percent of their funding from abroad are prohibited from participating in activities that advance human rights and the promotion of equality.

Photo by Addis Ababa Online: The Ethiopian House of Representatives.