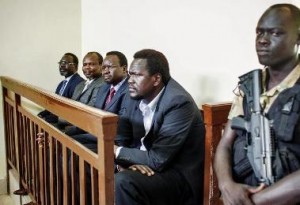 The five judge tribunal of a special court created to hear the trial of eleven South Sudanese politicians accused of complicity in the alleged coup d’état against President Salva Kiir in December last year, on Thursday, ruled for the trial of seven of the accused – released to the Kenyan government in January – to be postponed.

The judges, who noted that the customary procedures were not followed during the release of the group, reportedly came to the decision due to the inability of the prosecution to provide the seven in court.

According to local sources, on March 12th, the judges adjourned the trial for a week to enable the prosecution secure the presence of all the accused in court.

However, this has been impossible. Lead prosecutor, James Mayen, who had reportedly requested another adjournment, told the court that the order for their repatriation has been registered with the South Sudanese Ministry of Foreign Affairs and International Co-operation, who say they have relayed the “matter to Kenya through the diplomatic channels,” according to Radio Tamazuj.

In making their ruling, the judges noted that the trial of the eleven accused politicians should be held separately from their co-defendants currently in the country.

Monytuil Alor, the head of the defense team, welcomed the ruling as a “victory.”

He accused the prosecutors of attempting to delay the trial and noted that they had committed a technical error by attempting to secure the repatriation of the politicians since they were released under special circumstances.

When they were released in January, South Sudanese officials had disclosed that six of the seven politicians could still be repatriated to stand trial.

The South Sudanese government has been under immense pressure to postpone the contentious trial of the politicians.

According to some pundits, the trial could potentially derail the ongoing negotiations between the warring factions in Addis Ababa.

Meanwhile, the rebels continue to make the release of the four politicians currently on trial in Juba a precondition for peace.

Photo by Andrei Pungovschi/AFP: The four politicians in court on March 11th.