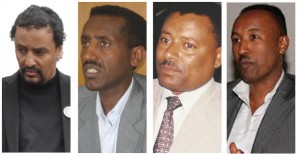 The Federal High Court has adjourned the widely discussed trial of the former director general of the Ethiopian Revenues & Customs Authority (ERCA), Melaku Fenta, and others, until March 18th, 2014.

According to reports, the defense lawyers have rested their case this week, in the trial which has been ongoing since last May and has led to the imprisonment of many high profile names.

Although the prosecution had requested a 3-month break to review the defense’s statement, the court has granted the prosecution from the Federal Ethics & Anti-Corruption Commission (FEACC) just one month.

The ERCA officials are being accused of easing the inspection procedures for undue benefits, by using the mutually beneficial relationships they established with high profile businessmen.

The charge specifically mentioned the personal connections of Nega G. Egziabhere of Netsa Trading Plc, and Gebrewahed W. Giorgis, ex-deputy to Melaku in the Law Enforcement Division of the ERCA, as well as Ketema Kebede of K.K Plc, with Melaku Fenta.

Additionally, Melaku and Gebrewahed have been charged with violating a law that permits impromptu inspections at the ERCA’s Adama Branch. This follows a study, which claimed that the customs clearance system in that branch was looser than Kaliti and thus preferred by alleged tax evaders.

The study conducted to investigate why the Kaliti Customs Office was producing low revenues  concludes that this has been one of the main causes of corruption.

The other charges that were made were predominantly against customs officials from the ERCA’s Adama Branch and Modjo Dry Port and Terminal.

During the court session held on Monday, February 17th, 2014, 12 defendants presented their statements of defense.

Besides reducing the amount of time requested by the prosecutors,  the court has also permitted the attorneys of Ketema and K.K Plc to make corrections to the statement of defense they submitted during the previous session.