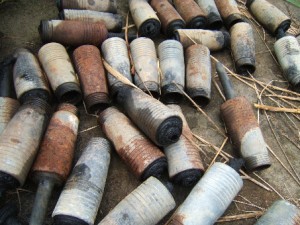 Human Rights Watch has requested that the governments of South Sudan and Uganda investigate new evidence that banned cluster bombs have been used in the South Sudan conflict.

United Nations (UN) experts found remnants of the weapons, including intact unexploded submunitions or “bomblets,” in the week of February 7, 2014, near the town of Bor in an area not known to be contaminated by remnants prior to mid-December 2013.

The arms division director of Human Rights Watch, Steve Goose, noted that “The young nation of South Sudan has enough problems without these horrific weapons, which kill and keep on killing long afterward.”

He added that “The governments involved should quickly find out who is behind this and make clear they will be held responsible.”

Fighting has raged since mid-December 2013 between forces loyal to the president of South Sudan, Salva Kiir, and those loyal to his rival and former deputy, Riek Machar.

Besides the national army, the Sudanese People’s Liberation Army (SPLA), the Nuer ‘white army’ and the Ugandan People’s Defense Force (UPDF) have all joined in the battle.

Reports indicate that the UPDF have provided the South Sudanese army with air support in their raids on rebel positions. But Ugandan commanders deny cluster munitions were used during any of their operations.

The UN Mine Action Service (UNMAS) has reportedly discovered several remnants of cluster bombs around Bor.

Although the UN Secretary General Ban Ki Moon has decried the use of cluster bombs in South Sudan, there have been no indications of which side is culpable to the accusations.

“The governments should enhance confidence in the independence and impartiality of the investigation by involving international experts, and by acting in cooperation with relevant international organizations such as UNMAS, the International Committee of the Red Cross, and others,” Human Rights Watch noted in a recent statement.

Meanwhile, South Sudanese officials have denied accusations that cluster munitions have been used in the war.

According to Defense Minister General Manyang Juuk, “These are total lies, it is not true, cluster bombs have never been used in the fighting.”

Hon. Wylbuur Simusa, President of the Convention on Cluster Munitions and Minister of Foreign Affair of Zambia has also criticized the warring parties in South Sudan for the use of this dangerous device.

He called on all nations who have not signed up to the cluster munitions treaty to do so, noting that “only a comprehensive global ban on Cluster Munitions will ensure a safe world for all.”

Currently, South Sudan is not a signatory to the Convention on Cluster Munitions.