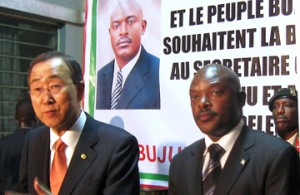 The resignation of three ministers of Burundi’s main opposition Union for National Progress (UPRONA) is threatening to derail the nation’s much anticipated all-inclusive 2015 elections and ignite violent conflict between its two main ethnic groups; the Hutus and the Tutsis.

On Tuesday, Feb. 4th, Jean-Claude Ndihokubwayo, Burundi’s Minister for Communal Development, and Leocadir Nihazi, the Minister for Information, Communication, Telecommunication and Parliamentary Relations reportedly resigned in protest against the sacking of the country’s Tutsi deputy president, Bernard Busokoza, who is also a member of the UPRONA party.

A day later, the Minister for Posts, Commerce, Industry and Tourism, Victoire Ndikumana, reportedly also turned in her resignation letter.

While official sources claim the country’s first vice president was fired due to his inability to distinguish between his roles as a member of the opposition and the deputy leader of the nation. Opposition sources have said Busokoza was fired because he opposed President Pierre Nkurunziza’s plan to run for a 3rd term in office.

Currently, UPRONA is the second main party in a fragile power sharing agreement between the two main ethnic groups in a country recovering from many years of civil war. While UPRONA is seen to represent the Tutsi people, the CNDD-FDD is seen as representing the Hutu people.

UPRONA was the only party to participate in the country’s 2010 elections, but it failed to nominate any presidential candidate.

According to reports, efforts to heal decades of ethnic-based civil war hit a standstill after the government disclosed its much debated constitutional reform plans in 2013.

The political climate in Burundi reportedly grew tense at the close of last year as the government attempted to rein in on widespread protests by opposition and human rights groups against the constitutional changes.

Reports have emerged of violence committed by the youth wing of the ruling CNDD-FDD.

Some critics have accused the nation’s security organs of complicity in these acts of violence, repainting a much dreaded picture of Burundi before the Arusha peace agreement in 2000.

Critics have said the move was effected to replace Nditijie with a sympathizer ahead of the country’s much anticipated national elections in 2015. However, Burundian officials are yet to make any official comments on the topic.

Reports indicate that President Nkurunziza dismissed Busikoza after he attempted to intervene in the crisis.

Many observers have noted that the political crisis in Burundi risks destroying several gains chalked over the past decade.

This revelation comes after President Nkurunziza recently demanded that the United Nations Office in Burundi, which has been instrumental in helping the devastated nation down the path of peace since 2006, hand over its operations to the Burundian government by mid-2014.

Prior to this row over the constitutional changes, tension had been brewing over land disputes and the government’s ambiguous law that set a qualification mark for Burundian journalists and places restrictions on their ability to report on a broad range of topics.

While observers express fears that the Burundian government is on the verge of a collapse. This past week, many Burundians chose to keep their eyes on the proverbial light at the end of the tumultuous tunnel as they expressed their hopes for development using the #myburundiandream tag.