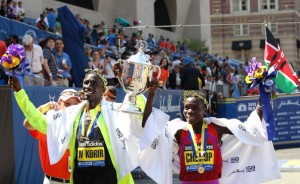 Kenyan athletes have allegedly threatened to boycott every upcoming international competition in protest against the government’s move to tax their foreign earnings.

According to reports, the athletes said they would not attend upcoming events such as the Commonwealth Games, Olympics, and the World Championships.

Furthermore, they have reportedly revealed that they would only concentrate on private events, should the move be implemented.

Led by Wisely Korir, a Member of Parliament and ex-Boston Marathon champion, the runners described the move by the Kenya Revenue Authority (KRA) as unpatriotic because they brand Kenya internationally with their exploits on the track.

According to sources, the athletes have indicated that they object to being subjected to unwarranted double taxation.

It is said that the impending move by the KRA did not sit well with a number of athletes, who met in Eldoret to protest against this resolution.

The former champion, Korir, also remarked that the taxation move would be unjust particularly because the athletes’ welfare is generally overlooked despite the fact that they are Kenya’s ambassadors.

He further cited the existing reward scheme for Qatar athletes who receive an equivalent of Ksh 100 million for winning gold, yet, according to him, Kenyan athletes do not receive a quarter of this amount despite being considered a superpower in athletics.

Observers say that the seemingly punitive tax pre-requisites, if implemented, could possibly prevent Kenyans from representing their country at the Olympics, which has long been a source of pride for the African country.

Analysts further add that the recent move could ultimately result in the emigration of Kenyan athletes to other nations.

On the other hand, KRA has reportedly defended the proposed taxation. In response to criticism against the proposed move, John Kosgei from KRA’s marketing and communications department stated that the taxation of athletes is not new.

He further cited the Kenyan law, which states that revenue accrued in Kenya or abroad is taxable, therefore, by law, Kenyan residents are required to pay taxes on their revenue irrespective of its source.

In a statement issued by KRA, the taxation body reiterated its mandate to collect tax revenue in addition to being accountable to the government.

The statement further indicated that the parliament determines the expenditure and fund allocation for government programs including sports.

Sources reveal that KRA will impose a 30 % tax rate on the athletes if it implements this move.

According to reports, when Kenyan athletes get paid for their participation in international competitions, 30-35% goes to the host country, 15%-the agent, 10%-the manager and soon an additional 30%-to KRA, if the move is completed.

According to Benjamin Limo, Kenya’s representative to International Association of Athletics Federations (IAAF), the major impetus for the new law is the absence of a treaty between the government of Kenya and foreign nations. During an interview with Nation Sport, Limo remarked that taxes undergo deductions before athletes receive their prize money.

However, when the athletes return home, KRA supposedly informs them that the foreign tax certificate is invalid, resulting in double taxation.

Meanwhile, critics state that the murkiness on this issue as well as the absent lucidity may compel athletes to consider better deals elsewhere, which has been Kenya’s problem for a long time.