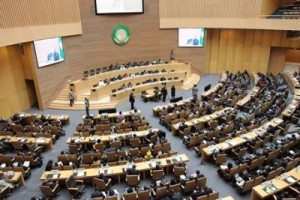 The 22nd African Union Summit scheduled to begin in Addis Ababa on Thursday, January 30th, will provide a platform for leaders from across the continent to voice their concerns and reach a consensus on the growing instances of civil unrest across the continent. But critics ask if the organization, which has been described as ‘weak’ and ‘slow’ by several commentators, is finally standing up to its role as the most important decision-making body in Africa.

At the 24th meeting of the African Union’s Executive Council on Monday, officials reaffirmed their committment to resolving the ongoing conflict in South Sudan and Central African Republic speedily.

Tedros Adhanom, the Ethiopian Foreign Minister, noted that an “urgent solution” is needed to resolve the conflicts in both nations.

According to him, the situation could have “serious implications for peace and security in the region, and indeed the whole continent.”

Although delegates of the warring factions in South Sudan signed a cease fire agreement last week Thursday, isolated instances of fighting have been reported in the largely underdeveloped nation.

The Ethiopian Foreign Minister has said that “There is no justification for the continuation of crises in both places [South Sudan and Central African Republic] even for a day.”

According to him, “The fact that these humanitarian tragedies are unfolding in the two countries at a time when we are talking about ‘African Renaissance’ must be painful to all of us.”

The African Union has been the subject of a barrage of criticisms over the organization’s alleged slow and indecisive response to conflicts in the continent.

But many have applauded the decision of the organization to stand up to the International Criminal Court last year concerning the trials of Kenya’s leaders, as, perhaps, ushering a new era of a more assertive African Union.

While the organization was not able to enforce its will in that instance, commentators say it has nonetheless expressed a determination by African leaders to create competent institutions to handle continental issues.

One of the issues lined up to be discussed at the upcoming African Union summit is the continental alternative to the International Criminal Court; the African Court of Justice and Human Rights.

The long awaited court, which is set to be built on the foundations of the African Court on Human and Peoples’ Rights, is expected to be provide a solution to instances where international courts are called on to arbitrate on continental issues.

Besides justice, the leaders are also expected to discuss agriculture and food security during the upcoming two-day summit.

Nkosazama Dlamini, the Chairperson of the African Union has, meanwhile, called on governments and individuals to invest in agriculture to promote sustainable development in the continent.

The African Union is also set to mark 10 years of its Comprehensive African Agriculture Development Programme, which is aimed at promoting development by increasing agricultural productivity.

Besides the aforementioned issues, the leaders will reportedly also table the African Union’s Agenda 2063 for discussion.