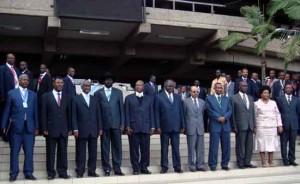 South Sudanese authorities have confirmed that an Inter-governmental Authority for Development (IGAD) summit, scheduled for Juba today, has been cancelled.

Mawien Makol, spokesperson for South Sudan’s Foreign Ministry told reporters that “The reason [the summit has been cancelled] is because of the AU summit in Addis Ababa next week. Most of the issues [affecting South Sudan] are going to be discussed there instead of having a quorum of the IGAD alone.”

In Addis Ababa, the regional authority, IGAD, has been responsible for mediating a cease fire agreement between representatives of President Salva Kiir, and his former deputy, Reik Machar.

Although both sides have expressed optimism that a cease fire deal could be reached soon, disagreements still linger over two key issues; the release of 11 ex-state officials in custody and the withdrawal of Ugandan troops from the country.

There are speculations that the cancellation of the meeting between heads of states and foreign ministers of IGAD member countries in Juba this week is due to a lack of consensus in the regional authority over the role of the Ugandan People’s Defense Force (UPDF) in the ongoing conflict.

South Sudanese authorities, besides noting that the agenda of the cancelled meeting will be tackled at the African Union summit in Ethiopia next week, have kept tight-lipped about the reasons for the cancellation.

There has been a widespread debate about the role of the Ugandan army in the ongoing dispute in South Sudan.

Even as they mull a request for additional troops, several Ugandan lawmakers continue to question President Yoweri Musuveni’s rather hasty decision to deploy the UPDF to South Sudan without parliamentary consent.

Critics of the President’s move amplified their voice when President Musuveni revealed last week that the UPDF had been actively involved in battles against rebels in Bor, alongside the South Sudanese military and the Sudan People’s Liberation Army (SPLA).

When prodded for comments on the issue, the chairperson of the East African Community’s Council of Ministers, Phyllis Kandie, told The Observer that the community does not support the intervention of the UPDF in South Sudan.

“That is an issue for Uganda, and I can say that it is mainly political, but I wouldn’t want to discuss it,” she said.

But Ugandan officials say the nation’s military intervention in South Sudan is legal and that it was made upon the request of the government of South Sudan.

Fred Opolot, spokesperson for Uganda’s Foreign Ministry in a recent report noted that “Before Uganda went to South Sudan on invitation by the government there, heads of state of IGAD met and acknowledged Uganda’s role in South Sudan. If there were to be dissatisfaction of Uganda’s role, I’m pretty sure that the IGAD members would bring Uganda to book.”

“Uganda has not been partisan at all,” he declared.

The Ugandan government continues to conceal the number of troops it has deployed to South Sudan, reportedly over security concerns. But officials have disclosed that about 9 UPDF soldiers have been killed in the conflict thus far.

With forces loyal to the government have taken control of virtually all the urban areas which had been under the control of rebels in the past few weeks, observers say the situation in South Sudan is particularly delicate adding to fears that the peace talks may grind to a halt.

Meanwhile, both sides continue to accuse each other of dragging the talks.

The United Nation on Wednesday accused the SPLA of conducting door-to-door raids of homes in the newly liberated areas, but President Kiir, in turn, says the organization backed the rebellion against his government.

Reports have emerged that the United Nations Security Council is rallying east African nations to deploy troops to South Sudan.

According to Amina Mohamed, Cabinet Secretary for Kenya’s Foreign Affairs Ministry, “The UN Security Council has approached several countries, Kenya and Rwanda among them, to contribute 5,500 peacekeeping forces.”

She revealed that some countries have already agreed to provide troops for the mission, but “Kenya is unlikely to send its troops.”

Humanitarian organizations operating in South Sudan say the month-long civil unrest has caused massive destruction to the world’s youngest nation. There have been claims of sexual abuse, mass executions and the use of child soldiers in the conflict.

Up to 10,000 people are believed to have seen killed and over 400,000 people displaced since violence erupted in South Sudan late last year.

Photo by Gurtong: Heads of states of IGAD member countries pose for a picture after a meeting in Nairobi, 2010.