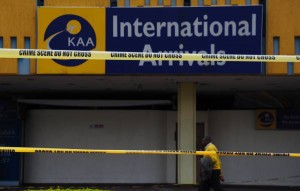 The Islamic extremist terrorist group, al Shabab, were behind a blast near the departure terminal of the Jomo Kenyatta International Airport last week, according to Kenyan police officials.

Earlier Kenya’s Inspector General of Police, David Kimaiyo, had noted that the blast was caused when a loose bulb fell into a bin in the Java Coffee Shop.

However, on Monday, police officials revealed that al Shabab is responsible for the explosion, which the group had hoped would destroy Kenya’s main international airport.

The terrorists are believed to have carefully scoped the venue before the failed attack last week Thursday.

In a related development, Kenyan officials have arrested some suspects in connection with the incident.

There are reports that between 3 – 6 unidentified Somali suspects were taken into custody in Nairobi’s Eastleigh district this past weekend over the explosion.

According to The Star, the suspects all stayed in the home of the owner of a car, which has been implicated in the airport explosion.

The car allegedly contained the body of a deceased man, an undetonated improvised explosive device, three SIM cards and a cup from the Java Coffee Shop.

Investigators have revealed that the abandoned car is believed to have been the same car the terrorists used to escape the airport after the failed explosion.

Meanwhile, Chief Ndegwa Muhoro, the Directorate of Criminal Investigations says it currently unclear if the suspects in custody will be charged.

He, however, pointed out that the owner of the Toyota Avensis car, who is considered one of the main suspects in the incident, is still at large.

al Shabab carried out one of their most deadly attacks on Nairobi’s Westgate Mall last year, which left over 70 people dead.

The group, who have promised to strike again, say the attacks are meant to coerce Kenyan authorities to withdraw from the African Union’s peace keeping mission in Somalia.

Photo by eNCA/Diana Neille: The international arrival terminal of the Jomo Kenyatta International Airport cordoned after the explosion last week.