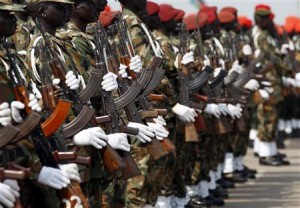 South Sudan Liberation Army (SPLA) General Marach Akoon has been killed in an ambush along the Yei-Juba road.

Akoon was reportedly killed along with two bodyguards of his, when an RPG hit the vehicle conveying the General to Yei town where he was due to replace defected General Peter Tut, according to a report by the Liberty Voice.

Akoon is the third top-ranking SPLA officer to be killed since Dec. 15th last year, when the crisis in South Sudan broke out.

Previously, General Abraham Jangroor and General Kuol Malith had been killed in a similar campaign for Bor.

General Malual Ayom Dor had also been reported killed in the campaign for Bor, but Dor later gave an interview to announce that he was alive and well.

Another General, Johnson Gony Biliu, was reported to have been the target of an attack which took place 33 miles (54 kilometers) east of Malakal, the capital of Upper Nile State. Biliu later revealed the attack was an assassination attempt.

In battles around Upper Nile State in recent days, rebels are reported to have captured trucks, tanks and machine guns from SPLA forces.

Bentiu, the Unity State capital, is now totally controlled by the government. Bentiu was retaken by the government after fighting last weekend. Fighting between rebels and SPLA soldiers took place in several locations in Unity State, including Dolieb Hill and Baliet county.

Bentiu is currently badly damaged. Houses, shops and vehicles have been looted and burned to ashes.

General James Hoth Mai, SPLA Chief of Staff noted that “What you see here is destruction. But the rebels are on the run and we are pursuing them.”

Unity State is renowned for it’s oil reserves. The state produces 45,000 barrels per day, about a fifth of South Sudan’s total production.

Rebels in Unity state are believed to have damaged oil facilities, according to government Information Minister Michael Lueth.

The government army however stated that they had taken the rebels’ tanks and Land Cruisers. They also predicted that the rebels would not return because they now lacked sufficient weaponry.

News of this high profile assassination comes amid reports that about 10% of the United Nations’ food stock have been looted in at least two war-torn states – Jonglei and Unity – where the most serious and prolonged battles have been fought over Bor and Bentiu cities.

Before the conflict broke out in mid-December, the UN’s World Food Programme in South Sudan had reportedly already taken measures to prepare for the floods, drought and conflicts that are common in the region.

The WFP had pre-positioned approximately 30,000 metric tons of food at almost 100 sites in South Sudan.

The 3,000 metric tons that were looted would be enough to feed 180,000 people for one month, according to the organization. The food provisions included sorghum and other nutritious foods.

The UN’s Food and Agriculture organization has stated that even before the crisis erupted in the young nation, about 4.4 million South Sudanese people were facing food insecurity. The current crisis could potentially increase the food insecurity and nutrition crisis.

Part of the problem is that the conflict has caused many South Sudanese–almost 400,000, according to current UN estimate – to become displaced.

Livestock, food stocks, seeds and agriculture have been abandoned or looted. Refugees who have taken their livestock with them have difficulty finding water and pasture for their herds. Animal vaccines have also been damaged. Trade and commodity routes have also been disrupted and shops destroyed, causing traders to flee and markets to completely or partially shut down.

The South Sudanese SPLA General was killed in an ambush about 19 miles outside of Juba as the UN reported its WFP food stocks had been looted in Jonglei and Unity states. Jonglei and Unity, along with Upper Nile, are the main states currently seeing conflict in South Sudan.

In a related development, Sky News has reported that rebels in South Sudan are retreating as the army pushes to retake the key town of Bor.

‘We have enough forces who will defeat the rebels within 24 hours,’ army spokesman Philip Aguer told reporters on Friday.

‘These forces — the rebels — are now retreating back.’

Almost three weeks of violence in South Sudan has forced around 200,000 people to flee their homes and affected many hundreds of thousands of people indirectly, the UN says.

Thousands of people are feared to have been killed in the fighting, pitting army units loyal to President Salva Kiir against a loose alliance of ethnic militia forces and mutinous army commanders nominally headed by ex-vice president Riek Machar.

Bor, the capital of Jonglei state and situated just 200km north of the capital Juba, is one of the hardest hit areas.

It has changed hands three times since the fighting erupted, forcing thousands to seek shelter in badly overstretched United Nations peacekeeping bases, and tens of thousands to flee across the crocodile-infested White Nile river.

The rebels retook the town last week Tuesday, but on Thursday, the army said they were advancing again to push them back.

‘I doubt if they can spend the night in Bor, and I am sure this evening they will move to the north of Bor,’ Aguer added.

Meanwhile government and rebel negotiating teams are at a luxury hotel in neighboring Ethiopia’s capital Addis Ababa, in the first stages of trying to hammer out a ceasefire deal.