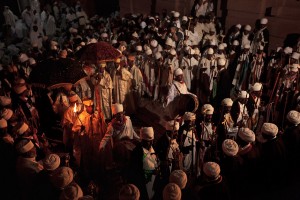 Orthodox churches across the world – including the Ethiopian Orthodox Tawahedo Church and the Coptic Orthodox Ethiopian Church – have celebrated Christmas day on Tuesday, January 7th, 2014.

‘Genna’ or ‘Lidet’ as it is known locally, is a very important occasion in Ethiopia, where about 50 percent of the indigenous population are Christians.

While Ethiopia’s Orthodox Churches use the Coptic calendar, which is based on an ancient indigenous dating system, most non-Orthodox Churches around the world use the more modern Gregorian calendar.

On Monday, Orthodox patriarchs from across the world are reported to have made their way to Jerusalem for this annual event.

Although the different Orthodox Churches across the world celebrate Christmas in a similar way, there are a few differences of note.

In Ethiopia, Christmas day is preceded by about 40 days of fasting. The celebrations are officially commemorated by a midnight mass on January 6th, followed by a feast.

The medieval stone churches of Lalibela are usually the scene of some of the most colorful Christmas day celebrations in Ethiopia, as thousands of locals and tourists gather around the rock-hewn churches for hymn recitals and other symbolic activities.

Photo by Mitchell Kanashkevich:  Priests in a Church in Lalibela perform a Christmas ceremony at night.