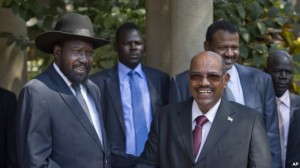 The leaders of Sudan and South Sudan met in Juba on Monday to discuss possible ways of protecting their shared interest in South Sudan’s oil fields, which are being threatened by the current insurrection.

There are fears other oil producing regions may fall under rebel control, after fighting was recorded in parts of Upper Nile state on Monday.

At the meeting in Juba between President Omar Al Bashir of Sudan and President Salva Mayardiff Kirr of South Sudan, the two leaders discussed the possibility of creating a joint task force to protect South Sudan’s oil reserves.

Officials also revealed that Sudan will send about 900 petroleum technicians to assist their South Sudanese counterparts.

The spokesman for Sudan’s Information Ministry told the media that both nations needed “to put in place a force to protect our shared interests in the oil sector.”

However, it is currently unclear how the government of South Sudan has received this proposal from its former adversary.

South Sudan only split from Sudan in 2011 after about 20 years of war which claimed an estimated 20 million lives.

President Omar Al Bashir of Sudan noted that both countries agreed “to the dividing of Sudan into two countries for peace, and our conviction is that armed activities do not solve problems.”

“It is important to sit at the negotiating table and reach an agreement,” he added.

Several pundits have speculated on the motives behind Sudan’s recent offers, linking it with the nation’s struggling economy.

Sudan receives fees from South Sudan for transferring and refining oil from the land locked nation for export.

South Sudan took about 75% of Sudan’s oil reserves when it seceded from the former in 2011. Despite the fact that South Sudan reportedly earns up to $7 billion yearly from its oil exports, the nation does not have any refineries of its own and relies almost entirely on pipelines passing through Sudan to export its oil abroad.

Meanwhile, in Addis Ababa, representatives of President Kiir and his former deputy Reik Machar met for the third day to negotiate a ceasefire.