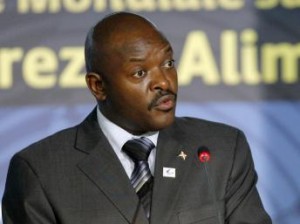 Disputes over land have been rife in Burundi in the past few years, as many citizens, who fled wars in the country between 1962 and 1993, return to find their lands being occupied by others.

Since many of the returning land owners do not have the necessary documents to prove their ownership. And many of the new occupants claim to have legally bought their lands, a sort of stalemate has been reached–with the dispute brooding menacingly.

Besides its economic value, land has an added cultural value in African societies, especially ancestral land.

Although Burundi’s law recognises ancestral claims to land ownership, several records went missing as the relevant authorities experienced work disruptions during the years of war in the country. As a result there is a gap in the public records, making it difficult to solve land disputes.

The land law under contention, which was only enacted recently, is reported to increase the authority of Burundi’s National Commission of Land and Other Belongings (CNTB) to settle disputes.

But Burundi’s main opposition party Unity for National Progress (UPRONA) says the new law overstretches the authority of the Commission of Land and Other Belongings.

The Daily Nation quotes Charles Ntijie, chairman of UPRONA, saying under the new law, the National Commission Lands and other Belongings “can now even investigate land disputes that occurred before Burundi’s independence.

“Far from uniting Burundians or reconciling them, this new law on the CNTB will divide them,” he adds.

Several other critics have noted that the new law risks creating a situation whereby multiple owners can lay claim to a piece of land–further deepening their dispute.

Having experienced two genocides in its history, critics are wary of the government unwittingly tilting the nation’s fragile unity between its two main ethnic groups; the Hutus and Tutsis.

Already the nation is gripped with tension following widespread disagreement over the government’s latest constitutional amendments.

Protests were reportedly planned to prevent the amendments last month, but they were mysteriously cancelled after the government arrested key opposition figures.

Critics say the new amendments will unlawfully grant more power to President Pierre Nkurunziza–who is reportedly planning to run for a third term. According to reports, the amendments could also disrupt the nation’s ethnic balance by eliminating its unique executive structure which permits two vice presidents.

Despite the fact that the opposition have boycotted the recent constitutional amendments as well as the enactment of the new land law, the laws have been effected as planned.

“We want the new law on the CNTB to be annulled or amended,” UPRONA’s chairman, Charles Ntijie states categorically.

Burundi is currently on the edge of conflict and many observers have called on the government and opposition to ensure their disputes do not drag the barely stable nation back into conflict.