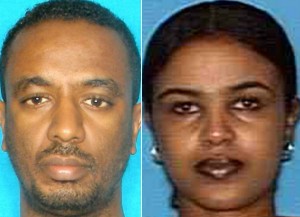 The tale of the Dallas Ethiopian restaurant Desta, is one of tragedy, hard work and ultimately, of love.

Husband and wife owners Yayehyirad “Yared” Lemma, 40, and Yenenesh “Yenni” Desta, 31, were shot and killed in 2012 by a customer who became obsessed with Yenni Desta. Their killer was convicted last December and will spend his life behind bars with no chance of parole.

The story — and perhaps the restaurant — could have ended with the brutal killings on the couple’s front porch. But their family — mainly Lemma’s two sisters — keeps Desta operating with the same love and hard work, hoping to create a legacy for the young son, now 3, that the couple left behind.

“This is not our story,” said Lemma’s sister Tizeta Getachew, who left her job running a domestic violence shelter to manage the restaurant. “This is their story.”

The restaurant — in a strip center on Greenville Avenue between Interstate 635 and Forest Lane — offers traditional Ethiopian food with a twist. Lemma, who with his wife was from Ethiopia, enjoyed tweaking the food with a different spice or changing the cooking style. That tradition continues today.

Lemma’s other sister, Yemi Lemma, handles marketing for the restaurant at night and on the weekends. She lives near Houston, where marketing is also her day job, and comes to Dallas when she can.

Other relatives pitch in when needed. An aunt can often be found cooking, and Lemma’s mother may stop by to chop vegetables.

Yared Lemma and Desta put long hours into their dream. The couple gutted the inside of the building themselves before opening the restaurant, and their son was born just as it opened.

Yared Lemma was quiet and shy and liked to work behind the scenes. Desta was a friendly, welcoming presence at the restaurant that bears her name. Getachew said that, to this day, Desta remains “the cornerstone of this place.” She was known to visit every table to chat with customers.

The sisters say that stepping away from the restaurant would diminish the legacy of their brother and sister-in-law, who both women say was more like a true sister than a relative by marriage.

“When their son asked me [years from now] what had happened to the restaurant, what would I say? That I was so sad or so weak from grief that was so strong, I let it go?” asked Yemi Lemma. “That was too much to even think about.”

The family asked that the couple’s son, who was born prematurely and weighing just over a pound, not be named. They often just call him “the little one.” He is being raised by Yared Lemma’s mother.

Exactly why Abey Belette Girma, 38, killed the couple is a mystery. At trial, Dallas County prosecutor Jerry Varney told jurors that Girma, who is also from Ethiopia, became obsessed with Desta even though he knew her only because he ate at the restaurant.

Girma followed the couple home one night in August 2012 after they locked up the restaurant and headed home, where Lemma’s mother cared for their son. When they reached the front porch of their house in Dallas’ M Streets neighborhood, Girma shot them both.

He would tell police that he and Desta had had an affair, but prosecutors and police found no evidence of one and said Girma lied.

The murders and their connection to the restaurant that Desta and Lemma loved might have been enough to make the family never want to go back. And for six months, they didn’t.

“People do ask, ‘How are you able to be in here?’” said Getachew as she sat inside the restaurant one recent afternoon.

“If we had that mentality, we’d be paralyzed at home, not able to do anything,” she said. “You just have to be strong. All of our energy is channeled to the little one.”

Varney, the prosecutor, said he hadn’t eaten at the restaurant yet, but he told the family: “Be looking for me, I’ll be there.”

“I’m going to hold him to it,” she said with a laugh. “I’ll send him a special invitation.”