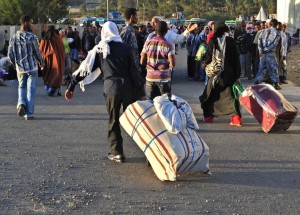 Officials have revealed that the number of Ethiopian migrant workers being  repatriated from the Kingdom of Saudi Arabia is set to exceed 150,000.

In a recent statement, the International Organization for Migration (IOM), which has been working with Ethiopian authorities to conduct the mass migration exercise, revealed that about 140,000 people have already been registered at transit centers in Addis Ababa and many more are expected.

“Ethiopia and IOM are now looking at an additional 35,000 migrants expected to arrive from the cities of Riyadh, Jeddah and new arrivals from Medina,” an IOM statement released on Wednesday revealed.

There are reports that over 1,000 migrants are flown to Ethiopia daily by Saudi Arabia’s national airline.

Although the current number of returnees exceeds the Ethiopian government’s initial estimates by a staggering margin, in a recent report, Ato Mihiretab Mutugeta, Chief of Protocol of the Ethiopian Ministry of Foreign Affairs revealed that about 10,000 migrant workers are expected to be repatriated in the coming days.

While some commentators have expressed alarm at the number of Ethiopian workers in the Kingdom of Saudi Arabia without legal permits. Others have focused on the social and economic factors that continues to drive hundreds of thousands of Ethiopians to the Middle East and other continents—despite the nation’s growing economy and numerous reports highlighting the cruel abuses and mistreatment Ethiopian migrant workers in many nations abroad are subjected to.

Since Saudi Arabian police and vigilantes commenced the operated to expel all illegal immigrants in the kingdom in November, there have been disturbing reports of abuse and mistreatment of illegal immigrants. At least 3 Ethiopians are reported to have been killed in an attempt to take them into custody.

Ethiopians across the world have organized protests against the government of Saudi Arabia, calling on the international community to join in the move to coerce the kingdom’s rulers to enact laws against the mistreatment of foreign workers, especially domestic employees.

Several Ethiopians have also decried what they describe as the Ethiopian government’s “soft” response to reports of the abuse of Ethiopians in Saudi Arabia. Ethiopian authorities are reported to have recently summoned the official representative of the Kingdom of Saudi Arabia to provide an explanation to the disturbing news. Although several reports suggest Ethiopian officials found the explanation provided by the kingdom’s representative insufficient, very little has been done since then.

Meanwhile, authorities have appealed for aid in dealing with the large number of returnees in transit centers around Addis Ababa.

“The IOM is urgently appealing to the international community for financial support to continue providing immediate post arrival humanitarian assistance to thousands of Ethiopian migrants arriving from the Kingdom of Saudi Arabia,” an IOM statement reads.

IOM recently revealed that about $13.1 million is needed to provide basic necessities for the returnees. The organisation is reported to have only been able to generate about $2.5 thus far.

The Ethiopian Red Cross Society has also appealed for aid in dealing with the crisis.

At 6 transit centers in Addis Ababa, thousands of Ethiopians returning from Saudi Arabia are provided basic medical care, food, shoes, accommodation (if they arrive at odd hours), and basic allowance (reportedly between $46 – $50) to facilitates their return to their respective homes in the country.

Due to their sudden repatriation from Saudi Arabia, many Ethiopian returnees have revealed that they were forced to leave empty handed. And with nothing to show for many years of hard work abroad, many are extremely disappointed.

But spokesperson for the Ethiopian Ministry of Foreign Affairs, Dina Mufti recently noted that “Despite a lot of sad stories, we consider this a blessing in disguise, as it could be a lesson for those who want to go there illegally and without proper preparation.

“These migrants have stories to tell on how they moved out, which could help the government to track down traffickers and improve the situation in the future,” he added.

The Foreign Affairs spokesman went on to reveal that many of the returnees have confessed that they would not have embarked on the perilous journey out of Ethiopia illegally if they had been aware of the dangers involved. He noted therefore that this is an ideal opportunity to educate the public on the dangers of irregular migration.

Ethiopian officials have also unveiled plans to create jobs for the large number of returnees (many of whom are women) through a small and medium enterprise creation scheme.