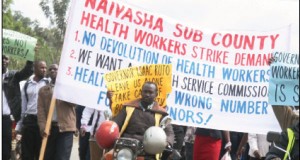 The strike began on Tuesday after the government’s attempts to negotiate with the workers failed. Doctors, nurses and clinical officers stayed away from their duty stations leaving patients stranded at government hospitals including Coast, Nyeri, Nakuru and Embu Provincial General Hospitals. Incoming patients were met by empty beds and locked doors, forcing them to seek health services elsewhere.

The country’s two national referral hospitals – Kenyatta National Hospital (KNH) and Moi Teaching and Referral Hospital – nonetheless, remained open. “The national hospitals will continue running because there is nothing we are complaining about there,” said the Secretary General of the Kenya Medical Practitioners, Pharmacists and Dentists Union, Sultani Matendechero.

The medical practitioners are unhappy with the governors’ decision to devolve heath services without proper legislation to oversee the process. They argue that the devolution process is inconsistent with the constitution and have accused governors of attempting to run health care “in a lawless manner.”

“We tried as much as possible to talk to the Governors… we gave all forms of suggestions which can allow us to arrive at the establishment of these laws and they refused. They said we just continue without putting the necessary laws in place,” said Matendechero.

The workers are also demanding that their salaries continue to be channeled through the national governments. They refuse to compromise on this even after the government ceded some ground and extended the handling of payroll until February 2014.

Cabinet Secretary for Devolution and Planning, Ann Waiguru, says “there is absolutely no reason for the health practitioners to withdraw their services.” The Attorney General has also stated that the strike is illegal since health services are part of essential services as outlined in the fourth schedule.

The workers however do not seem to be deterred as there are fears that the unrest could spread to national hospitals. The Union’s Secretary General even revealed that workers at the Moi Teaching and Referral Hospital are complaining about their workload and are threatening to also down their tools.

Strike Declared Illegal
The High Court, on Wednesday, issued a temporary order prohibiting the health workers from carrying on with their strike following an urgent application by the Attorney General. The order will remain valid until 16th December when the case will be heard at the industrial court.

Union representatives maintain that they will not call off the strike, but said they are ready to resume negotiations with the government.

“We are not asking anything out of the extraordinary. What we are asking is within the law,” said Kenya National Union of Nurses Secretary General Seth Panyako. “We are asking that our personnel emoluments to remain under the National Government,” he explained.

The Transition Authority had earlier announced plans to decentralize health services and transfer all related functions to the counties by January next year. The opposition and labor unions have opposed the move on the basis that the constitution provides a three-year window for devolution. There are also fears that equal allocation of funds in the health sector will be affected will be affected by devolution.