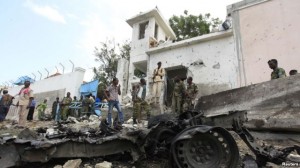 At least 8 people have been confirmed dead and 37 others injured in Somalia’s northern port of Bassasso, Puntland on Thursday, when a suicide bomber attacked a military convoy.

The bomber targeted the convoy carrying Puntland Marine Forces and local security officers in the coastal region, which is reported to be a hideout for Al Shabab.

“There was a car bomb attack targeting vehicles of the security forces, it rammed the convoy and exploded,” Abduallahi Said, a policeman present at the port town told AFP.

“Several people have been killed; so far we confirmed that eight were killed, but the toll could be higher, many of those who were injured were rushed to hospital,” he added.

Although no group has claimed responsibility for the bombing, al-Qaeda linked Islamist militants, al Shabab, have carried out similar attacks in the past.

President Hassan Sheik Mohamud condemned the attack saying the “terrorists have lost the war on the battlefield and are now devoting all their efforts in harming innocent civilians.”

After losing several of its strongholds last year to a joint force of AU, Ethiopian and Somali troops, al-Shabab is reportedly trying to regain its influence by taking over towns in northern Somalia ahead of the country’s elections in January next year. The elections were initially scheduled for July this year, but was postponed to January 2014 due to high risks of violence.

The Puntland region is semi-autonomous and has not officially declared independence from Somalia like Somaliland. Until now, the region has remained relatively peaceful and has not been affected by the war that engulfed other towns in Somalia.

Photo: Debris after an al Shabab suicide bombing near the UN compound in Moghadishu, Ethiopia. [Reuters]