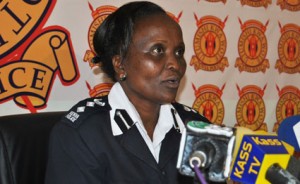 Kenya’s Police have revealed that Lorogon village in Turkana county is not under siege contrary to reports, and that no Police station in the border region has been taken over by armed Pokot youth, according to the Standard.

There had been reports that Lorogon has been taken hostage by an armed Pokot group, with over 900 villagers cut off from communication with the outside world. The reports also claimed that 3 Police camps had been usurped during the siege on Lorogon.

According to a statement by Kenya’s Red Cross Society, two Pokot businessmen were shot by gunmen thought to be from Turkana county on the 18th of this month, prompting an armed Pokot group reportedly numbering 150 to attack the Lorogon village. The KRCS also noted that an estimated 900 people are still trapped in the village, which has been surrounded by the armed Pokot group.

The disputed Lorogon village has seen many killings in the past few weeks, pundits say the murders are rooted in the territorial dispute between the Turkana and Pokot people. The Lorogon village, which is located in West Pokot, is largely populated and administered by people from Turkana, thus the conflict.

According to a report by Capital FM, on Wednesday South Turkana’s Officer Commanding Police Division Richard Kipsang was leading a contingent of officers, largely drawn from the Anti Stock Theft Unit (ASTU) and the Administrative Police (AP), when they were confronted by 200 armed Pokot youth, who denied them entry into Lorogon claiming the area belongs to the Pokot people. The officers, while retreating are reported to have come under attack, however, upon the intervention of a few Pokot elders, the officers were reportedly allowed to continue on their journey to assist residents of Lorogon.

Gatiria Mboroki, the National Police Service spokesperson has confirmed that there were confrontations between the Turkana and Pokot people over Lorogon last week. She also revealed that over the weekend Police posts in Lorogon were attacked by an armed group thought to be from the Pokot community.

The Police in Lorogon are reported to have requested for back up, and Kenya’s Interior Ministry says more officers have been dispatched to the disputed village. Local authorities are reported to have imposed a curfew on south Turkana and West Pokot county as security officers attempt to bring the situation under control.

Today, Pokot elders dismissed reports of Police camps being held hostage by Pokot youth. According to the report by the Star newpaper, Senator John Lonyangapuo accused Turkana leaders of depriving the people of the truth. “The youths only yesterday barricaded Kitae – Lonwar highway to demonstrate against the recent attacks in the region that have led to more than 15 people losing their lives in two months,” the senator said. Adding that no Police camps have been taken over.

Senator Lonyangapuo commented that one way to end the conflict is to bring Lorogon under the administrative jurisdiction of West Pokot county. He also called on the government to investigate reports of the recent attacks, as well as reports by people from the Pokot community that some killers resided in Lorogon.

Territorial conflicts over scare resources are allegedly not new in the semi-arid north-western part of Kenya close to the Ugandan border. According to the Kenyan Red Cross Society, “we have had similar incidents in Turkana, East Pokot, West Pokot, Tana River County, Samburu, Marsabit, Isiolo, and Moyale in the recent past.” The KRCS is calling on the central government and county authorities to solve the crises, which it says is threatening to destabilize the region.

Meanwhile, KRCS’s director of External Relations and Resource Mobilization, Wariko Waita revealed that the society has dispatched two groups to Eldoret and Turkana to negotiate with local authorities to facilitate their access to the cut-off areas in order to provide needed humanitarian aid to villagers, who have allegedly been kept hostage for over 4 days.