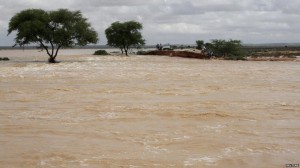 About a week after a cyclone hit the eastern and northern coastal areas of Puntland, officials say delivering supplies to villages worst affected by the storm is proving difficult.

Entire bridges and roads linking communities are reported to have been washed away by floods following many hours of heavy rain last weekend.

Officials from the Puntland Disaster Management and Rescue committee say although the rain has since stopped, the floods have not subsided, making it impossible to access numerous communities. As a result, the actual extent of the damage caused by the storm cannot be accurately verified.

Relief workers, short of solutions, are reported to have started making their way to isolated communities on foot and donkey carts.

Earlier in the week, Puntland authorities revised the death toll resulting from the cyclone to 400. About 100,000 livestock are also reported to be missing.

The government of Puntland have made an appeal to the international community for assistance in dealing with the aftermath of this cyclone. Officials say the small nation lacks the necessary resources to deal with the widespread effects of the storm.

On Friday, supplies from the governments of Ethiopia and Djibouti were delivered in Puntland. The President of Puntland Abdirahman Mohamed Farole revealed that both nations are due to deliver more aid in the coming weeks.

Meanwhile, Puntland authorities have issued new flood alerts to residents in parts of the nation’s capital Garowe. According to Ali Abdulahi Warsame, Puntland’s Minister of Health, torrential rains are expected in the area, which may lead to flooding. Residents were therefore cautioned to be on alert.