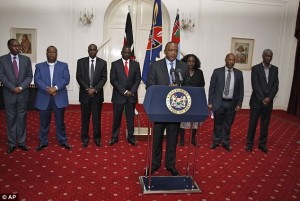 The Kenyan government is allegedly planning a major re-assignment of officials in top state positions including ambassadors and other parastatal office holders.

The new appointees, due to be revealed in the coming days, are expected to fill important positions which have remained vacant since the Jubilee government took office earlier in the year.

This shake-up is alleged to be part of President Kenyatta’s attempt to build a more effective government and avert a repeat of the administrative lapses which occurred during the attack on the Westgate mall in September.

This re-assignment exercise is reported to have been set in motion following recommendations by a special task force led by Abdikadir Mohammed, the State House Constitutional Adviser. The task force had advocated a reduction of the number of directors and eliminating some ministries.

The President’s special advisers–led by James Kinyua, Chief of Staff and Head of Public Service–are allegedly responsible for selecting the officials to fill various positions.

Several ex-members of Parliament and administrators are expected to resume public office as directors and CEOs.

The Star Newspaper speculated that Francis Muthaura, former Head of the Kenyan Civil Service is due to be appointed as Chairman of the Lamu Port Southern Sudan-Ethiopia Transport (LAPSET). While former Minister Chirav Mwakwere is expected to take up the position of Chairman at Kenya Ports Authority. Kenya Airport’s Managing Director George Muhoro is set to head Kenya Power, and former Kengen CEO Eddy Njoroge will most likely be appointed informal energy adviser to the President.

The paper also speculated on the appointment of several Members of Parliament to new positions. According to the report, former Isislo MP Abdul Buhari is set to be Chairman of the National Social Security Fund board. While former Kanukunji MP Simon Mbugua is expected to be Chairman of Kenya Betting and Control Board and former Kikuyu MP Lewis Nguyai is due to take up chairmanship at Kenya Leather Authority. Also, Veteran Sammy Choge is likely to be announced as the new Kengen Chairman, while Joe Kibe will be appointed Chairman at the Kenya Pipeline Authority.

According to the laws of Kenya, the new appointees must be approved by the National Assembly before they can officially begin working in their new positions.

There are speculations that Secretary for Defense and Interior Joseph Ole Lenku and Secretary for the Coordination of National Government Raychelle Omamo will be replaced following their poor performance during the fall-out of the Westgate attack. However, there has been no official confirmation of this.

These reports of new appointments comes amidst controversy in the Kenyan parliament involving Charity Ngilu, the Cabinet Secretary for Land, Urban Development and Housing. According to reports, Mrs Ngilu had appointed Peter Kahuho as Director General of the Lands Ministry, replacing the Lands Commissioner Zablon Mabea. Several MP’s are calling for the sacking or resignation of Mr Ngilu after the attorney General Githu Muigai declared her appointment of Peter Khuho to be illegal since the office of ‘Director General of the Lands Ministry’ is not recognized under Kenyan law.

President Kenyatta’s administration has come under a barrage of criticisms following the Westgate attack. Critics say the President surrounds himself with a group of informally appointed special advisers comprising politicians, technocrats, members of his cabinet and some of his relatives at the expense of his actual cabinet—who are reportedly complaining of feeling left out of the governmental process.