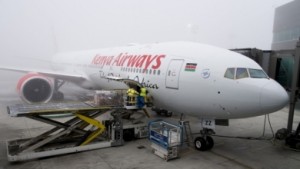 Kenya Airways has leased its largest aircraft yet – a Boeing 777-300ER – as the company prepares to introduce new continental routes.

The aircraft, which has a 400-passenger capacity and can carry over 20 tonnes of cargo, was delivered to Kenya Airways on Friday by GE Capital Aviation Services (GECAS). It is the first of three Boeing 777-300ER aircrafts the company intends to acquire as part of its 10-year strategic plan to increase its fleet size from 44 to 107, and its destinations from 62 to 115.

Kenya Airways’ Group Managing Director and Chief Executive Officer, Dr Titus Naikuni, termed the delivery of the new aircraft as a key milestone for the company.

“Its long-haul capability is a perfect fit for our network expansion plans as it will enable us serve our existing long range markets much more effectively and facilitate the opening of routes in the near future,” he added.

Dr. Naikuni also stated that the new aircraft would begin operating on the Nairobi-Guangzhou route in November. The airline already operates a daily flight to Guangzhou via Bangkok, but with the 777-300ER, the company will introduce 3 non-stop flights weekly.

Van Rex Gallard, vice president of Sales for Africa, Latin America and the Caribbean, Boeing Commercial Airplanes, termed the 777-300ER as an excellent addition to Kenya Airways “rapidly expanding long-haul fleet” saying that it would increase the company’s capacity and flexibility on new and existing routes.

“We look forward to working in close partnership with Kenya Airways to provide it with exceptional airplanes as the carrier continues its ambitious growth plan to offer passengers a wider choice of destinations coupled with enhanced in-flight comfort,”

Some of the most exciting features of the new plane include a Premier World section featuring full flatbed seats with leather foot-rests, a laptop storage area and privacy dividers on the armrests. Other features are WI-FI connectivity, a 15.4 inch touch screen monitor for each seat, high quality in-flight entertainment, power plugs and USB ports.

The plane will also have more legroom for economy class, adjustable headrests, a USB port for each seat and strategically placed power sockets throughout the cabin.

Kenya Airways flies to over 60 destinations in Asia, Africa, Europe and the Middle East. Its current fleet has more than 25 Boeing air crafts including a long-haul fleet made up of four 777-200ERs and six 767-300ERs. There are also nine 787 Dreamliners currently on order from Boeing.