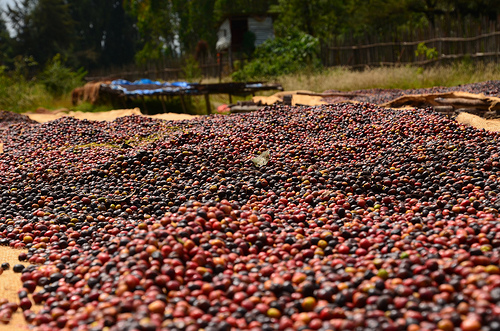 Ethiopia’s exports declined in value by 2 percent in 2012-13 from a year earlier due to declining prices for coffee beans even as volumes increased, the Trade Ministry said.

The value of exports from Ethiopia, Africa’s biggest grower of coffee, declined to $3.08 billion in the 12 months through July 7 from $3.15 billion a year earlier, the Addis Ababa-based ministry said in an e-mailed statement.
The International Monetary Fund predicts that the Horn of African nation’s $43 billion economy will grow by 6.5 percent this year, faster than the 5.6 percent average for sub-Saharan Africa.

Revenue from coffee exports declined to $746.4 million in 2012-13 from $832.9 million, while volumes jumped 18 percent to 199,104 metric tons, the ministry said. Arabica coffee prices dropped 31 percent in the period, according to data compiled by Bloomberg. The price rose 2.9 percent to $1.2480 per pound by the close in New York yesterday.

Gold, the country’s second-biggest source of export revenues, fetched $578.8 million, falling 4 percent from a year earlier. Earnings from other minerals, excluding tantalum, jumped 48 percent to $12.4 million, while sales abroad of khat, a leafy plant that is used as a mild stimulant, raised $271.5 million, an increase of 13 percent, the ministry said.

The impact of Ethiopian exports on the overall economy is limited since the country’s economy is mainly driven by public investment and private consumption, Lars Christian Moller, the World Bank’s lead economist in the country, said by phone today from Addis Ababa, the capital.

“The ambition is to have export-driven growth but Ethiopia needs to make further progress on improving competitiveness to realize this,” Moller said.