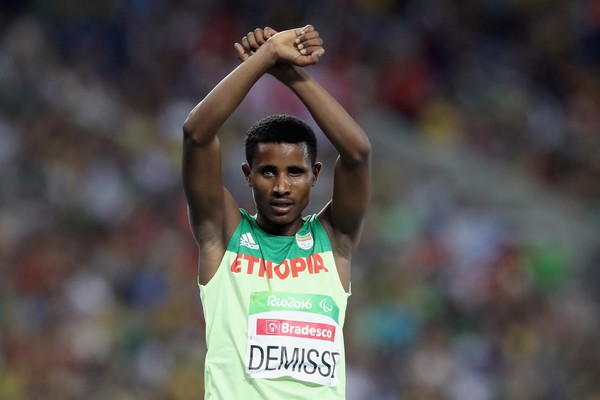 Ethiopian Paralympian Tamiru Demisse showed solidarity with Oromia protesters—who have clashed with the country’s government—as he claimed a silver medal, following a protest gesture made by Olympic counterpart Feyisa Lilesa.

Demisse, who competed in the men’s 1,500-meter T13 race for visually impaired runners, claimed a silver medal in the race on Sunday at the Olympic Station in Rio de Janeiro, Brazil. As he crossed the finish line, Demisse crossed his arms above his head.

The gesture has become widely adopted by members of the Oromo people, the country’s largest ethnic group. Oromo protesters have clashed with Ethiopian security forces in recent months, with Human Rights Watch claiming the unrest has seen more than 400 people killed. The Ethiopian government has denied these deaths occurred.

Demisse, 22, repeated the gesture on the podium and again in the athletes’ mixed zone. The athlete said he did not want to return to the Horn of Africa country but wanted to go to the U.S. “If I go back, I’m a dead man,” said Demisse, according to Brazilian television network Globo. “I am totally against what they are doing in Ethiopia, [and I’m] against the government.”