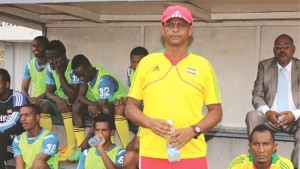 The head coach of Ethiopia’s national football team Yohannes Sahle and his entire technical staff have been sacked.

Shale’s dismissal has not been officially confirmed by the Ethiopia Football Federation (EFF). However, there are reports that EFF President Junedin Basha is currently reorganizing the team’s technical structure.

“It’s true Sahle has been relieved of his duties with immediate effect to pave way for another technical bench,” a SuperSport report read Thursday. “The federation executive committee made the resolutions to give the national teams a fresh impetus after it became apparent Sahle and his technical bench were not up to the task.”

Sahle, 50, an Ethiopian born-U.S. citizen, has spent a year at his post as coach of the Walya Antelopes.

Ethiopia is a football-loving country and managers pay dearly for poor performances of the national team. Sahle replaced Portuguese Mariano Barreto who was fired after the team failed to qualify for the 2015 African Nations Cup.

Sahle, a former Ethiopia player, was very enthusiastic about being appointed head coach. However, the enthusiasm quickly waned. He complained about receiving little support and appreciation despite qualifying for the CHAN 2016.

“I am done with the team in fact when I go back to Ethiopia I will step down because I really feel unappreciated after working so hard with very minimal preparations ahead of Chan 2016,” Sahle told SuperSport after Ethiopia’s elimination from the competition. “The federation has not made things easier for me because I was expected to get results and yet we did not get adequate preparations only training for nine days and playing one friendly game yet most of the teams in the competition prepared adequately.”

Sahle returned to Ethiopia in 2010 to work as the EFF’s technical director. Before being appointed as head coach, he managed the U-17 national team and Dedebit, a big Ethiopian club.