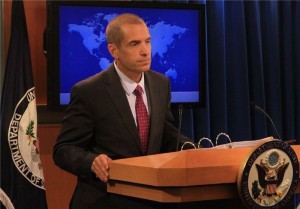 The United States has called for dialogue in Ethiopia’s Oromia region after student protests against a government expansion plan turned fatal.

According to Human Rights Watch (HRW), at least 75 protesters have been killed in clashes with Ethiopian security forces.

The new wave of protests against a plan to extend the capital city Addis Ababa into Oromia began in November.

Hundreds, including university, high school and even primary students, were reportedly involved in the violent protests.

The U.S. State Department has expressed concern about the violence and urged the Ethiopian government to permit peaceful protests.

In a statement published on Saturday, U.S officials admonished protesters from using violence while calling for dialogue to address their legitimate demands.

“We urge the government of Ethiopia to permit peaceful protest and commit to a constructive dialogue to address legitimate grievances,” deputy State Department spokesperson Mark Toner said. “We also urge those protesting to refrain from violence and to be open to dialogue.”

The protests originally began in 2014 when the Master Plan or the Addis Ababa and the Surrounding Oromia Special Zone Integrated Development Plan was first proposed. The students, who are predominately from Oromia, say the plan equates to land grab, which they claim would have devastating effects on the inhabitants of the region and their culture.

However, the government has said the plan, which will see the rapidly developing capital Addis Ababa expanded into Oromia state, will benefit the inhabitants.

Ethiopia’s Communication Minster Getachew Reda has said the ‘Master Plan’ will not intrude on the administrative boundaries of the Oromia region.

Officials say the demonstrations, which began peacefully, have since been high-jacked by people who want to destabilize Ethiopia.

“We know destructive forces are masterminding the violence from the forefront and from behind and they have burnt down a number of government and people’s property,” Ethiopia’s Prime Minster Hailemariam Desalegn said. “We have also seen that armed forces have killed and injured security forces and members of the public. This thing cannot continue like this. I would like to pass a message that we, in conjunction with the public, will take merciless legitimate action against any force bent on destabilizing the area.”