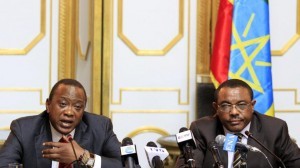 The deal was signed at the border town of Moyale, northeast Kenya on Monday. Kenya’s President Uhuru Kenyatta and Ethiopia’s Prime Minister Hailemariam Desalegn were present at the signing of the agreement.

The United Nations (UN) supports the cross-border trade pact, which will be implemented by both Nairobi and Addis Ababa. The projects, which aim to improve the lives of people living in the border region, have already received UN funding.

Kenya’s Marsabit County and Ethiopia’s Borana Zone of the Oromia Regional State are the target of the trade agreements. The region was selected after recent cross-border conflicts between rival ethnic groups.

The conflicts, which are usually about water, pasture and the theft of livestock, has claimed many lives and forced thousands to flee.

President Kenyatta stressed the need for cooperation between the neighboring East African nations. He added that Kenya and Ethiopia must resolve the needs of the communities living along the border.

“We know that our prosperity and security demand cooperation between the two countries. We have learned from the past: we can no longer make policy about resources without considering our neighbor’s legitimate interests, and doing what we can do to accommodate them,” Kenyatta said.

“That way, we avoid wastage, while building on each other’s strengths. That is what our brotherhood requires of us.”

Prime Minister Desalegn said the ties between Ethiopia and Kenya are strong and have been renewed under President Kenyatta.

He stressed that Ethiopia will focus on ensuring that the cross-border program would be a success for the entire region.