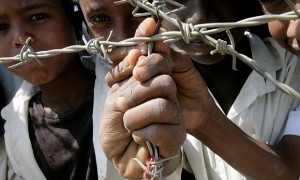 Eritreans are of the second largest migrant group seeking entrance into Europe via the Mediterranean Sea. Children and young people are said to constitute the majority of about 200 people who flee the secluded East African country daily.

Eritrea, with a population of about 4.5 million, is reportedly becoming empty. Nearly 10 percent of the country’s population – about 400,000 people – have fled. However, not everyone has made it successfully to Europe through the perilous journey via the Sahara and Mediterranean.

Thousands are stranded en route, others face worst fates including death by drowning. Eritreans are the majority of the 3,000 migrants who have drowned in the Mediterranean this year.

Eritrean migrants unable to make it past the Sahara to Libya, stay at refugee camps in northern Ethiopia. Unaccompanied Eritrean children also live in these camps and many are depressed.

According to Vice News, between June and August this year at least four of these children have attempted suicide. One was successful.

Job Onyango, an employee of the Center for Victims of Torture counselor, who works in the refugee camps, said “Most of these young people had expectations of migrating [further on].” He said suicide attempts occurred at the peak of migrations to Europe during the summer.

“And so they are not being able to go, and that’s one of the reasons that is causing them to feel desperate and take these measure,” Onyango revealed.

Onyango said Eritrean minors make up almost half of those fleeing their country. “The majority are under 35 – minors and young men and women, and even the adults coming in are coming with two or three children,” he said.

Medhanye Alem, an Ethiopia counselor who works with children in the Mai Aini refugee camp said there are different issues that push children to attempt suicide. Some include challenges with living in camps where they don’t receive enough food or basic amenities like toiletries.

“The ones who stay in the camp for three or four years get depressed and attempt suicide,” Alem said. “And there is also pressure, especially the one who are living under group care.”

The United Nations has accused the Eritrean government of mass crimes against humanity. Although Asmara has denied the accusations, thousands continue to flee.

“While Syrians are fleeing an obviously terrible and documented civil war, Eritreans are fleeing abuses which the rest of the world are largely invisible because of the regime’s secretiveness,” said Kristina Touzenis, head of the Migration Law Unit of the International Organization for Migration (IOM).

Many Eritrean migrants fleeing the country are reportedly trying to escape compulsory military conscription which is usually indefinite. Young men and women are reportedly enlisted into the military during their last year in high school. As a result, many choose to flee before graduating from high school.